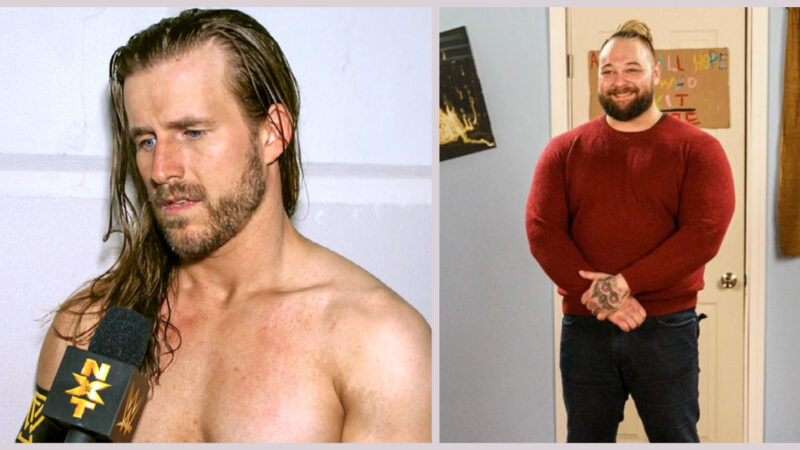 Could Adam Cole and Bray Wyatt be on their way to All Elite Wrestling? CM Punk made his AEW Dynamite debut on the heels of an extremely memorable All Elite Wrestling debut on AEW Rampage. During the show, Punk would discuss how younger talent such as Penta el Zero M, Rey Fenix, Brian Pillman, Jr., Jungle Boy, etc brought him back to the world of professional wrestling.

However, one interesting development did take place during Punk’s promo as many have pointed out Punk was wearing shoes with the letters ‘BW’ on them – suggesting a potential tease in regards to Bray Wyatt who was released from his WWE contract earlier this Summer. This Bray Wyatt huge money contract offer recently leaked.

It should also be noted that last week, Punk also wore attire that stated the letters ‘AC’ on them – which some have speculated could allegedly mean ‘Adam Cole’.

In other related news – AEW President Tony Khan discussed the CM Punk deal during a recent interview with Le Batard & Friends – South Beach Sessions. Khan also would also discuss if the he believes the CM Punk deal has ‘paid for itself’. Credit to Wrestling Inc for the below.

“I believe this was one of the best deals I’ve ever done in my life. And I don’t think it was really all about money,” Khan said. “If you listen to what he (Punk) and I said on the press conference we did, we did a scrum that was like 50 minutes. And he gave so much of his time, he was so generous with everybody that night, in terms of obviously wanting to spend times with fans. But then also creating this great moment by buying thousands of thousands of ice cream bars so that everybody in the United Center was able to go out and get their free ice cream bar. That was pretty amazing, and that’s something people will always remember. It was just a really cool thing for him to do for the fans. He was also really cool about going backstage and offering really, really kind advice, being really good with his time with the wrestlers.

Khan would continue: “Yeah. I mean I do think so,” Khan said. “In terms of what this has done for our business, I really believe that, as soon as we saw the results from this, before we even got started, I knew this was the best deal we could’ve possibly done.” This Bray Wyatt fan was ‘harassed’ by WWE at Raw

BW on CM Punk's sneakers. Bray Wyatt? On Friday, he had AC written on them. #AEWDynamite pic.twitter.com/H9Yr6T9JcW