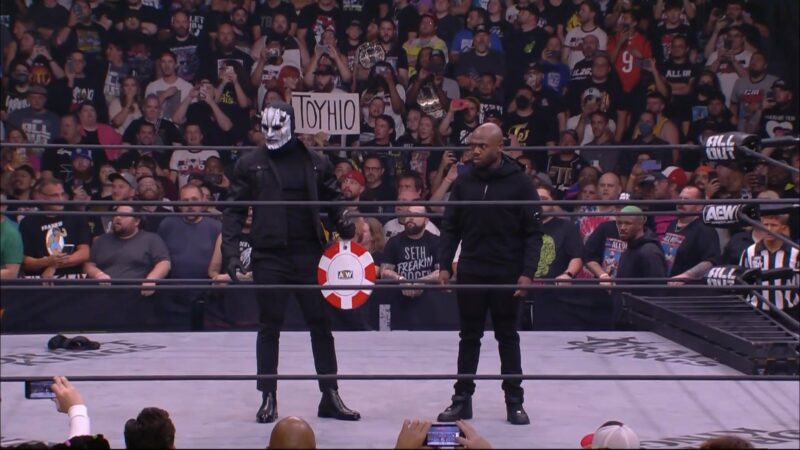 AEW fans have pointed out that MJF is likely the Joker who won the opening match at AEW All Out, as seen in tweets below pointing out the “Sympathy for the Devil” connection, The Rolling Stones song played for The Joker’s entrance.


“No Sympathy for the Devil” – Is #MJF The Joker who won an #AEW World Title Match tonight at #AEWAllOut?
pic.twitter.com/0FuCoUH9jw

– Stokely was MJF’s manager on the indies.

– Joker came out to "Sympathy for the Devil"

– MJF's line to Punk: "The greatest trick the devil ever played was pretending he didn't exist."#AEW #AEWAllOut pic.twitter.com/L2Th60FUHE

#ALLOUT #aew #AEWAllOut2022 #AEWAllOut
One of MJF's workout songs was sympathy for the devil. pic.twitter.com/5GsH2slCw0

MJF’s last AEW promo in June was a worked shoot attack on Tony Khan, and WWe are now going down the same route. WWE star Seth Rollins and Matt Riddle a bitter history together. It goes way back before they shared a locker room on the WWE main roster. The two have taken shots at each other in the past and Riddle’s ex-wife event took a shot at Becky Lynch as well. Lisa Riddle threw some shade at WWE’s women’s roster for being out of shape and looking sloppy. She used a photo of Becky Lynch’s rear end in the process to make her point. This did not land well and only heated the things between Riddle and Rollins.

On this week’s edition of Monday Night RAW, during a segment, Riddle and Rollins had a heated war of words and the former mentioned Lynch while taking shot and Rollins. ‘The Visionary’ even fired back mentioning Riddle’s ex-wife. This led to Riddle dropping some F-Bombs.

While speaking to Ariel Helwani, Seth Rollins confirmed that those old comments were not for a stroyline at all. In fact, they totally came out of the blue.

“No, I don’t even know what prompted her to do that. I don’t even know in what context or what world she thought her opinion was necessary. I don’t want to spend too much time on her, but the main crux of it was, ‘Yo dude, you work with us, we’re supposed to be working together and you’re creating this divide where this doesn’t need to be one.’ Him speaking up and saying, ‘I’ve got her back no matter what she says because she’s my ride or die,’ I get it, but there are better ways to handle the situation,” he said.

“I never talked to him. I never said anything to him. I believe the comment happened when he was in NXT and when he got called up to the main roster, I was like, ‘Don’t want to work with him, don’t want to deal with him.’ It’s very easy to ignore people if you want to.”