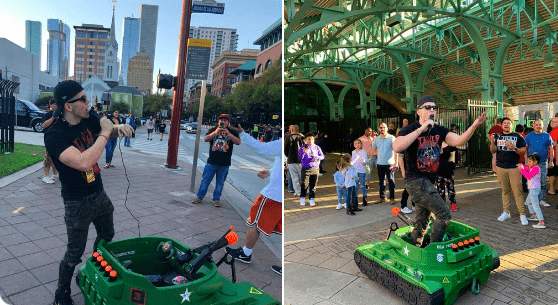 The Royal Rumble is here and so is the hype that usually comes with it. This year’s Rumble is taking place at the Minute Maid Park in Houston, Texas.

Thousands of fans are in attendance for tonight’s mega-show, including some really unexpected and probably uninvited guests.

AEW’s Sammy Guevara was spotted outside the Minute Maid Park earlier today and he wasn’t alone. Guevara had a mini-tank with him and a walkie-talkie through which he was, for some odd reason, reciting Scott Steiner’s infamous “Math” promo.

This was an obvious attempt at parodying D Generation X’s invasion of WCW from back in the day. You can check out footage of Sami’s little “invasion” of the Royal Rumble:

AEW's Sammy Guevara has turned up outside the #RoyalRumble at Minute Maid Park in a miniature tank.

For some reason he is reciting Scott Steiner's infamous promo.