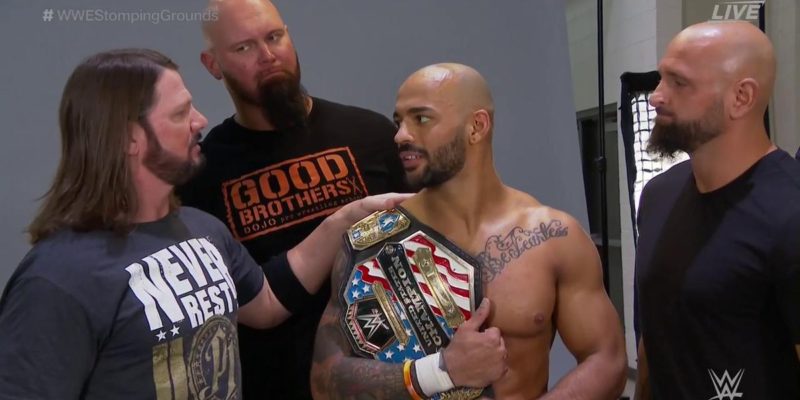 Ricochet claimed his first main roster title by defeating Samoa Joe for the United States Championship at WWE Stomping Grounds. During the custom photoshoot which takes place after a new champion is crowned, Ricochet was confronted by Luke Gallows and Karl Anderson along with AJ Styles.

The Phenomenal One said that he would meet Ricochet on the upcoming edition of RAW at Everett, Washington. The match was confirmed by the WWE soon after. This seems to have ended AJ Styles’ injury which kept him out for a while. Ricochet’s newly wonUnited States title will not be on the line.

Have a look at WWE’s announcement:

Ricochet took full advantage of his first singles title opportunity by overcoming Samoa Joe to capture the esteemed United States Championship. Now that he’s titleholder, however, it is clear that he will have no shortage of challengers.

Case in point, moments after AJ Styles, Luke Gallows & Karl Anderson invited themselves into the new titleholder’s photoshoot, The Phenomenal One said he would see Ricochet on Raw.

WWE.com has since learned that the two Superstars will, in fact, square off in a non-title match. Will Ricochet rise above? Will Styles end the celebration and set himself up with a future title opportunity? Will the defeated Samoa Joe play a role in the contest?