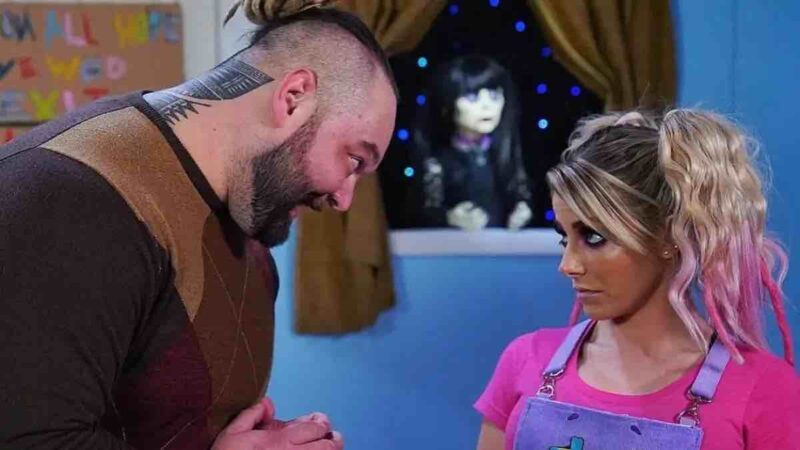 WWE star Alexa Bliss might once again undergo a gimmick transformation. On this week’s edition of Monday Night Raw, Bayley was involved in a promo segment where she ripped Bliss for being a shell of herself. Bliss said in the promo segment that Bayley was acting “like you’re 10 Feet Tall.” Bayley had then defeated Bliss during the main event. In the match, the announcers were pointing out that Bliss was not putting everything she had into the match with the idea that she had lost a step into the ring. The lights went out briefly during the main event.

Fans have also noted that in the ‘White Rabbit’ song, there is a lyric that states, “Go ask Alice, When she’s ten feet tall.”

Previously, during the September 16 episode of SmackDown, arena speakers played the iconic 1967 psychedelic rock song “White Rabbit” by Jefferson Airplane. Red lights were flashed and the crowd turned on their phones’ flashlights, similar to how it was done during Bray Wyatt’s entrances. Bliss dropped the supernatural aspects of her gimmick earlier this year after portraying a similar gimmick to Bray Wyatt’s character. Some fans in attendance believed that these occurrences are teasing the return of Bray Wyatt.

It seems that Bliss has addressed the rumors on Twitter.  Alexa suggested that she had ‘no idea’ what people were talking about.

“I literally have no idea what ppl are talking about sometimes … make up something else ppl” she wrote.

It is also to be noted that after a backstage segment on RAW with Austin Theory, a QR code could be seen in the background, and when scanned, it was noted that it takes to a video on WWE.com featuring a white rabbit.

The video asks the question, “Who killed the world?” The letters fill in to say “You did,” and then a “Come with me” message appears before it flashes “9.23,” the date of Friday’s episode of SmackDown, so it appears another clue will be revealed, or the White Rabbit will appear.

We will have to see what WWE has in store for the fans.