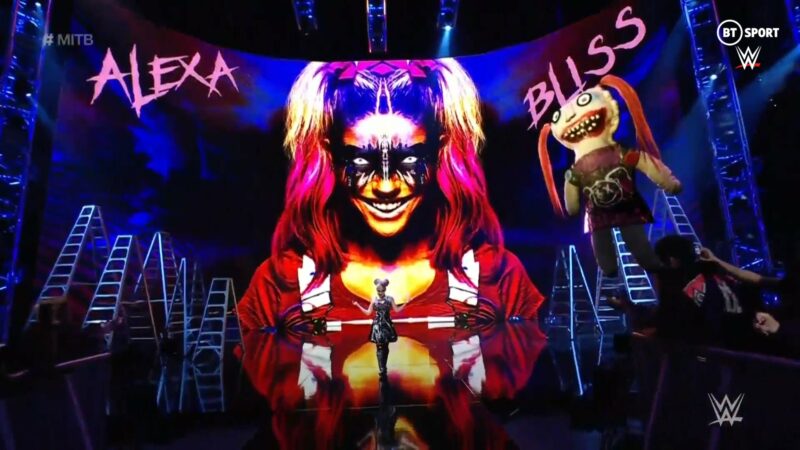 WWE Money In The Bank has been an explosive pay-per-view so far with the Uso’s winning the WWE SmackDown tag team champions and a new Women’s Money In The Bank briefcase holder crowned. Nikki A.S.H. outlasted several other women, including the fearful Alexa Bliss to win the briefcase tonight. Is Alexa Bliss getting more money than Seth Rollins?

During her entrance, she had the WWE Universe under her spell as she took off her traditional ‘dress’ style of attire to something more revealing. The photo of her Money in the Bank attire can be viewed below.
Also under her spell during this match was Zelina Vega as Bliss would hypnotize Vega to climb down the ladder, preventing her from grabbing the briefcase. Both moments can be seen below.

In other news regarding Alexa Bliss and WWE Money in the Bank, fans over on the ever-popular Squared Circle subreddit are discussing the ending to the women’s version of the signature ladder match. One fan named JargonPhat stated: “I thought this was great. Every woman got a moment to shine, Alexa got the Brock treatment, Liv had a couple of memorable spots. The way the cameras spent so much time focused on Bliss during the entrances, I legit thought she was just gonna magic herself an early win. I thought the ending was a little contrived, but as an unabashed Nikki Cross fan, I’m happy to see her eventually cash in if they go somewhere with it outside of Damian Sandoval territory”

Bliss ditching the dress ring gear gets a pop from the crowd. #MITB pic.twitter.com/KyBh8xydrQ