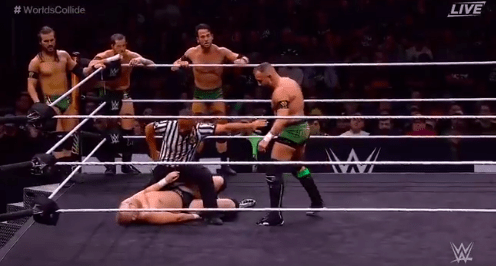 As seen on NXT’s Worlds Collide event, the Undisputed Era went up against NXT UK’s Imperium in an eight-man tag team match. The match was eventually won by Imperium but at a great cost.

During the match, Imperium member Alexander Wolfe took a kick to the face by Undisputed Era’s Bobby Fish. Fish expected Wolfe to get back up but he didn’t and the referee went in to check on him.

Upon inspection, the referee asked Fish to stand back and threw up the “X” sign. Wolfe couldn’t continue further and it looked like things weren’t good.

Wolfe was then taken out of the match and didn’t return back.

Wolfe could have suffered a potential injury but it has not been confirmed yet. Stay tuned for more updates on Wolfe’s injury status.