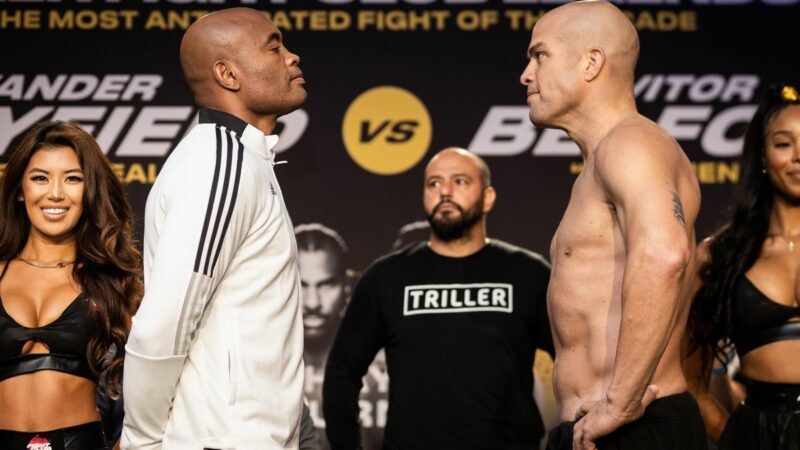 UFC icons Anderson ‘The Spider’ Silva and ‘The Huntington Beach’ Bad Boy will be featured as the co-main event during tonight’s boxing supercard, which will feature the most anticipated fights of the year as Evander ‘The Real Deal’ Holyfield steps in the ring for the first time in several years to take on Vitor Belfort. Anderson Silva recently ‘exposed’ Dana White.

Ahead of tonight’s showdown, during the debut episode of MMA Fighting’s first-ever Portuguese-language podcast Trocação Franca – Silva jokingly accused Ortiz of drug use due to his views on the COVID-19 pandemic. Credit to MMA Fighting for the below quotes.

“Man, I don’t want the drugs he’s using,” Silva laughed. “It’s complicated… I’m kidding. Brother, there are things you must treat as a joke, there’s no other way around it. To each his own, I guess.”

In addition, during the interview, Silva discussed the possibility of facing Vitor Belfort in a rematch. The two faced each other in the main event of UFC 126 back in 2011.

Silva stated: ““Unless he tattoos the ‘Spider Kick’ on his chest and writes ‘I love Anderson Silva’ right below, then it might happen,” Silva said with a laugh. “He must get the tattoo done before the fight. It must be on his chest, nicely done, really big, so everyone sees the kick. Other than that, there’s no way.”