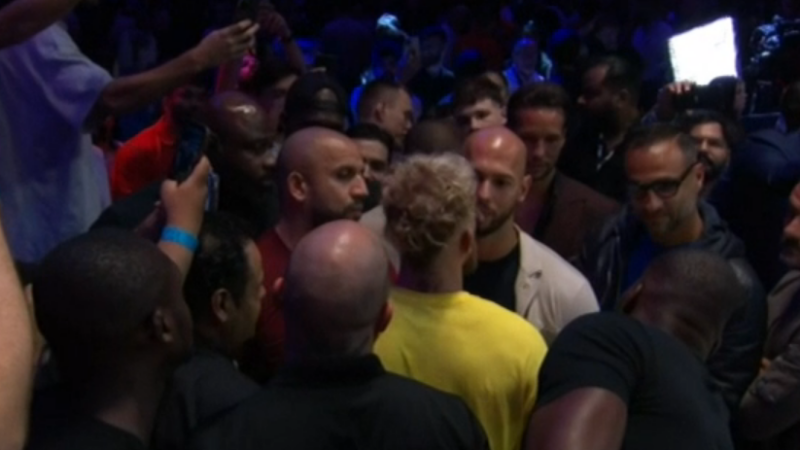 Andrew Tate completely ignored Jake Paul as he conducted a live interview at Floyd Mayweather vs. Deji, humiliating him by constantly looking at his phone and looking like he was falling asleep, as seen below.

Jake Paul has also teased a fight against Conor McGregor. At UFC 274, Michael Chandler defeated Tony Ferguson with a solid front kick. Right after that, he called out Conor McGregor for a fight.

Holy sh*t. What an INCREDIBLE KO from @michaelchandler

And on top of that just delivered a truly electrifying promo that already sold tickets to his next fight, that’s not even booked yet. Light fighting, promo work is a special skill that =‘s#UFC274

Chandler lost to former title challenger Dustin Poirier at UFC 281 on Saturday. After a promising start to the fight, his volume slowed as the fight went on and Poirier submitted him in Round 3.

During his UFC 281 post-fight press conference, Chandler made his latest pitch for a fight with McGregor.

“I don’t think I’m the easiest fight that he could take, but I do think that I’m the biggest fight that he could take,” Chandler said. “I think Conor McGregor stepping back in the Octagon does big numbers no matter what. But he and I step inside the Octagon, we do staggering numbers. I do think that. And I respect him, will love to see him come back. Maybe I’m the guy he comes back and fights.

Yeah, get on it, man,” Chandler said to McGregor. “We all know that fighting is his first love. Exactly six years ago today, November 12, 2016, he became the double-champ and he apologized to absolutely nobody, and it was absolutely awesome. He’s a legend in the sport, man. He’s the biggest name in the sport.

“It was bad enough we had to compete with Bentleys and Bugattis and boats, and $100 million whiskey companies. Now, we gotta compete with the silver screens and bright lights of Hollywood, man. But come back to your first love, Conor. Step inside the Octagon with me.”