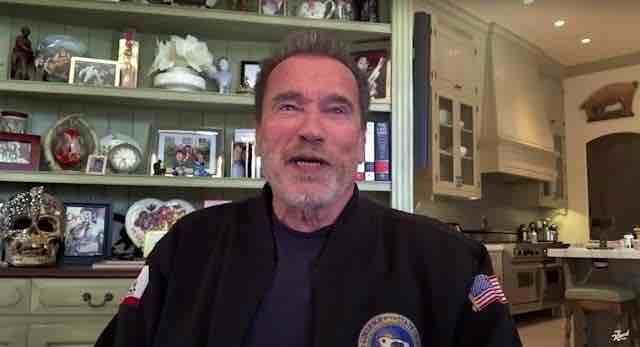 Arnold Schwarzenegger has been a legendary actor in the action genre. He is also a seven-time Mr. Olympia winner. He has been able to make a lot of new friends over the years.  He is part of many sequels-based movies like The Terminator, The Expendables, etc. Around eight years ago, on a cast dinner party night of ‘The Expendables 3’, Arnold was clicked with one of his old friends having fun at the dinner table.

Back in 2014, the cast of “The Expendables 3” gathered in Cannes to celebrate their upcoming release. All the stars were present and enjoyed lunch hosted by a Swiss jeweler. Although Arnold missed the lunch, he joined the cast for the dinner party. The party was star-studded and the cast gathered together for group photos and more.

However, while having dinner, Arnold and Harrison Ford had a great fun time together. Both of them were enjoying themselves and unknowingly they posed for a picture for the fans. In the picture, they were pointing fingers at each other and looked to be enjoying each other’s company.

Find out what Arnold Schwarzenegger and Harrison Ford are celebrating at dinner: http://t.co/MEakfT9xiG pic.twitter.com/pXXU3Rcn2j

It has been noted that Arnold is all set to debut in television series. In addition, he is going to debut through a Netflix original. According to the announcements, the name of the series is “Fubar”. Arnold recently announced the name in an Instagram video. In the video, he conveyed a heartfelt message to the crew about their precious contribution to the project. The fans are eagerly waiting for the series to release. Moreover, the fans are also super-excited about the next movie of “The Expendables” franchise.