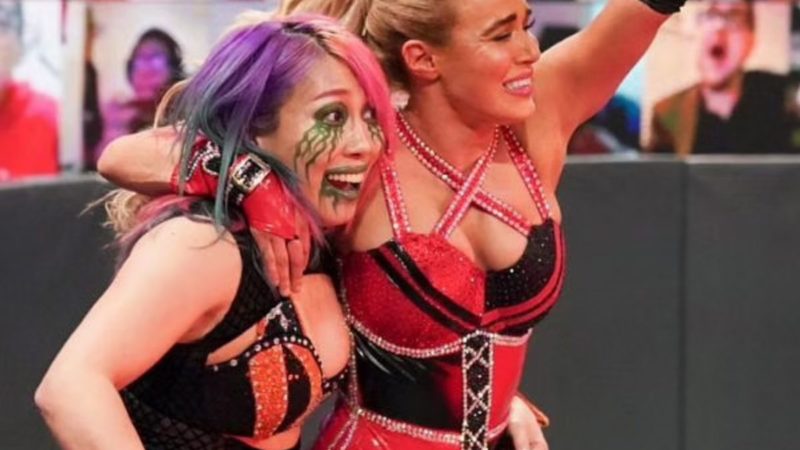 Lana and Asuka were supposed to challenge the Women’s Tag Team Champions Nia Jax and Shayna Baszler at WWE TLC for the title.

But after tonight’s episode of RAW, Asuka needs to find a new partner for Sunday.

Lana out of TLC after being attacked by Nia Jax

Earlier on RAW, Lana secured the biggest victory of her career by pinning her longtime bully, Nia Jax. Asuka gave her a pep talk before her match and cheered her on from the Gorilla.

But the celebrations did not last long, as she was yet again attacked illegally by Nia Jax after the match was over. Shayna Baszler soon joined in after beating down Asuka backstage. The two inflicted brutal injuries to Lana’s arm and knee as The Ravishing Russian begged for mercy.

Asuka came in for the save, but it was already too late. Lana was badly injured and was in no condition to wrestle at TLC one week from now.

Later on, during a match between Shayna Baszler and Dana Brooke, the commentators announced that Lana would not be able to compete at TLC.

WWE later revealed backstage clip of Lana being carried on a stretcher and then driven away in an ambulance as Asuka checked on her.

Who will be Asuka’s new partner?.

Asuka appeared inside the ring once again after the match between Shayna Baszler and Dana Brooke ended in a disqualification because of Nia Jax’s involvement.

The Tag Team Champions prepared to beat down Dana Brooke just like they have done to Lana so far. But her own Tag Team partner Mandy Rose returned to WWE television and came in for the save with a Kendo stick. Asuka also showed up in this segment to help Rose and Brooke.

With Lana out of TLC, Asuka now needs a new partner to challenge Shayna Baszler and Nia Jax.

As of yet, no name has been revealed or hinted at by WWE

There are already rumors brewing of the return of The Queen. Charlotte Flair recently uploaded a picture of her training in the gym as well.

If WWE keeps the name of Asuka’s new partner under the wraps, the speculations of it being Charlotte Flair will only grow in the next few days.