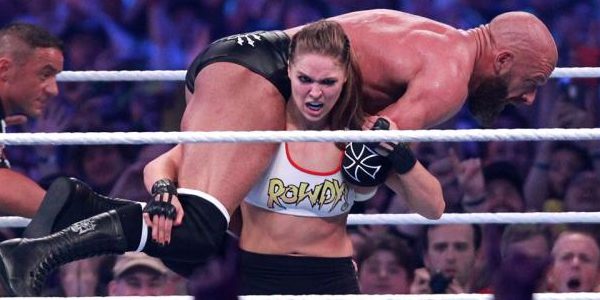 During a recent interview with USA Today’s For The Win, Raw General Manager Kurt Angle revealed some interesting backstage details about his WrestleMania return match.

Angle was part of a mixed tag match and he teamed up with WWE’s latest signee Ronda Rousey to face the team of Triple H and Raw Commissioner Stephanie McMahon.

Their match at the Show of Shows received praise from fans around the world and was considered one of the best matches of the night during WrestleMania 34.

During the interview Angle revealed that the whole bout as it played out was laid out by himself and one half of his opponent for the show Triple H.

Continuing on the topic, he also talked about how they were worried about the crowd reaction for Ronda Rousey’s debut but things turned out good and Rousey also got better as the match went on:

She performed beyond our expectations. We… we weren’t nervous that she was going to fail, we were just nervous that maybe the fans wouldn’t take to her the way they did. And they did – they took to her from the beginning, and she just got better as the match went on. Not only with her technique, but her facials, and the way she took her time. She acted like she was a seasoned veteran, and she’s not.

Kurt Angle is set to return to the ring for the upcoming Greatest Royal Rumble match in Saudi Arabia. When Ronda will have her next match is not known yet.