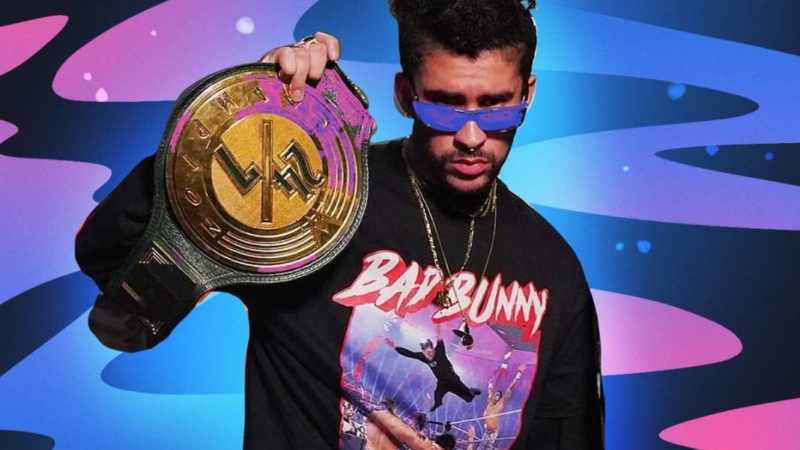 AEW star Big Swole recently took to social media via Twitter to make quite the comparison and she she posted a picture of David Arquette after his infamous WCW World Heavyweight Championship win and implied that a Bad Bunny WWE Championship run might just be in the international recording artist’s future. “#BadBunny in 4…..” Swole captioned as you can see the referee raise the bewildered arm of Arquette.

However, such a shocking move would actually make sense given the fact that Bad Bunny is currently at-odds with now current WWE Champion – The Miz. The Miz won the WWE Championship for the second time tonight during the 2021 edition of the Elimination Chamber event where he cashed in his ‘Money in the Bank’ briefcase on ‘The Scottish Warrior’ Drew McIntyre to win the title.

Bad Bunny has been nothing short of a success for WWE since arriving for the company. The acclaimed rapper won the 24/7 title with the help of Damien Priest, which is performed with on Saturday Night Live and in addition has been the top merchandise seller for WWE since his arrival, selling over half a million dollars of merchandise this year. WWE WrestleMania and celebrities go together like peanut butter and chocolate – but it is still seems like a longshot that a WWE Championship match between Bad Bunny and The Miz will ever actually materialize. This WrestleMania 37 match featuring Bad Bunny & The Miz was recently revealed.