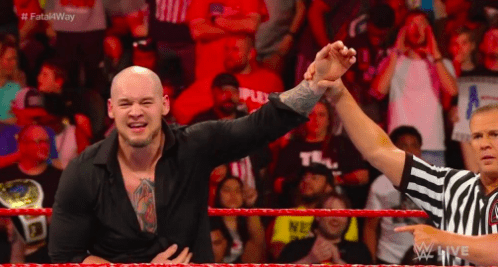 As seen on this week’s episode of Monday Night RAW, a fatal 4-way match between AJ Styles, Braun Strowman, Bobby Lashley and the Miz was announced to determine Seth Rollins’ opponent at Super ShowDown. However, AJ Styles was announced to be injured and so he was replaced by Baron Corbin who also jumped him backstage.

Are you interested in a Baron Corbin & AJ Styles feud? #WWE #RAW

Corbin ultimately came out as the victor from the fatal 4-way match after he hit the End of Days on the Miz and pinned him for the three counts and the title shot. Therefore, it is now official, Seth Rollins will face Baron Corbin at the Super ShowDown event from Saudi Arabia.