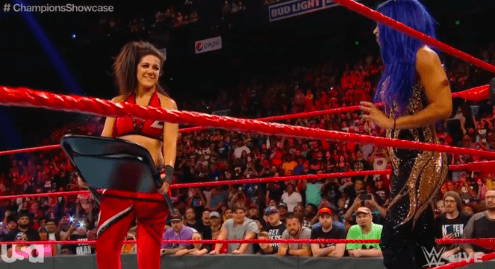 As seen in the main event of Monday Night RAW, Becky Lynch and Bayley faced off against the Women’s Tag Team Champions Alexa Bliss and Nikki Cross. However, in the middle of the match, Sasha Banks came out and stayed at ringside for the rest of the match.

However, when the match was nearing its end and Lynch was dismantling Bliss and Cross, Banks finally interfered and attacked Lynch. The Boss then brought out a steel chair and started to hit Lynch with it until she was stopped by her best friend – Bayley.

At first, it looked like Bayley was stopping Banks from attacking Lynch but after giving out a sinister grin, Bayley finally turned heel and attacked Lynch with the steel chair. The audience went crazy and a thunderous “YES” chant broke out as Bayley brutalized Lynch in the middle of the ring.