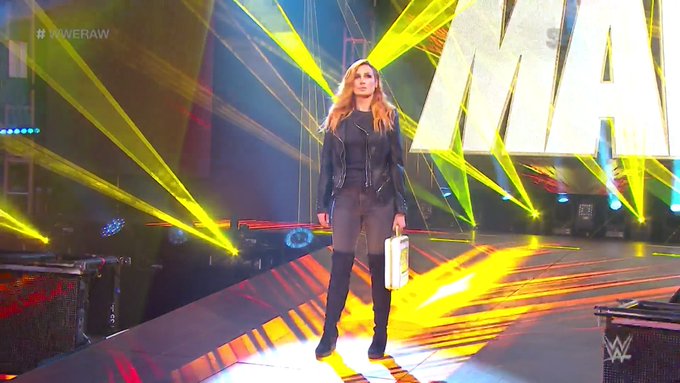 Becky Lynch has been absent from the ring for quite some time now. Last week, she revealed that she’d have a face to face meeting with the winner of the Money in the Bank ladder match.

At MITB 2020, Asuka won the women’s briefcase, setting her up for another legendary encounter with The Man. However, it didn’t play out exactly as we’d expected. Lynch walked down to the ring, Asuka’s briefcase in hand, to make two announcements.

As Asuka entered the ring, Lynch revealed that the briefcase was already holding the RAW Women’s Championship. Lynch stated that last night’s match wasn’t for an opportunity at the belt, but for the belt itself. Asuka is now the new RAW Women’s Champion.

Asuka celebrated around the ring, but Becky Lynch managed to steal the moment when she revealed that she was pregnant. Her longtime rival embraced her before starting a “Becky” chant.

Below are some of the reactions of Lynch’s fellow competitors and co-workers.

She’s done so many amazing things. Now, @BeckyLynchWWE is going to do the MOST amazing thing. Congratulations, my friend.

Congrats @BeckyLynchWWE! Not every kid gets to say their Mam is The Man, but yours will. Absolutely buzzing for you. ❤

Wow!!! Goosebumps!!! Welcome to the Mommy Club!! It’s a great club to be apart of!! You’ll be an amazing mother like you were a Champ. Xxoo -Brie https://t.co/DTYvZzPwtY

Becky Lynch sent out one final tweet, excited to start her new family.

I have no idea what happens from here, but I do know that you’ve made all my dreams come true. I entered the PC in 2013 not knowing anyone, I'll leave that same building tonight with my new family. Thank you all so much. pic.twitter.com/auSvwtx3gp