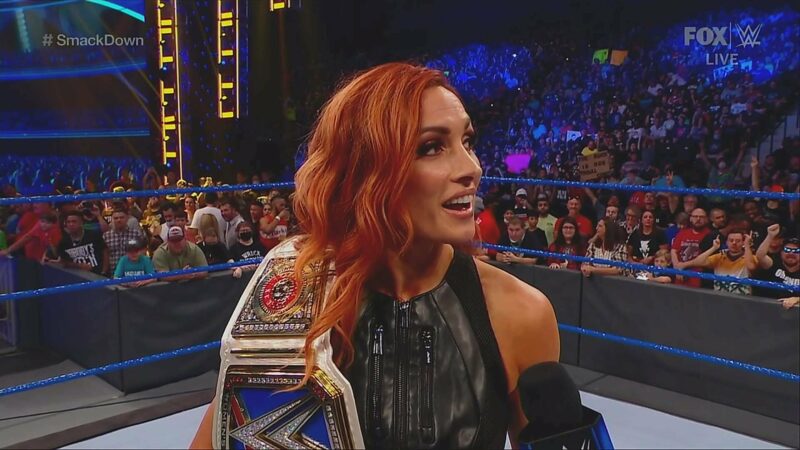 Lynch broke character in a backstage interview to praise Lita following their dream match at WWE Elimination Chamber. The RAW Women’s Champion has considered Lita to be her idol since her teenage years and recently she faced the Hall of Famer and successfully defended her championship.

Lynch evidently tried to hold back her emotions during her post-match interview. However, she could not hold back herself from praising the 4-time Women’s Champion after their huge title match at the show. Lynch said that she wanted to face the best version of Lita, and that’s precisely what happened at the recently concluded Premium Live Event.

Lynch also went on to recall how she grew up watching Lita and was overwhelmed while defending her title against her childhood hero. She also revealed her motivation during the match and how was he mental preparation going up against someone who was always special to her as an aspiring pro-wrestler. She said:

“It was, it was [special]. There were a lot of emotions coming into this match and now there is a lot of emotions after leaving this match. My childhood hero [Lita], the person I looked up to in a match that I honestly never thought is going to happen. And when she challenged me, there were so many conflicting ideas in my head that yes, this is something that a 13-year-old me would have loved but now, it is right before WrestleMania. And if anything happens, if I slip on a banana peel and fall, I could lose the most important thing in my life to my childhood hero and how badly would that affect me.”

EXCLUSIVE: #WWERaw Women's Champion @BeckyLynchWWE has much to reflect on right now… a dream match with @AmyDumas at #WWEChamber and a #WrestleMania opponent in @BiancaBelairWWE! pic.twitter.com/KvxCYtLK8h

Bianca Belair won the Women’s Elimination Chamber match and she is set to be the challenger of Lynch’s WWE RAW Women’s title at WrestleMania 38.