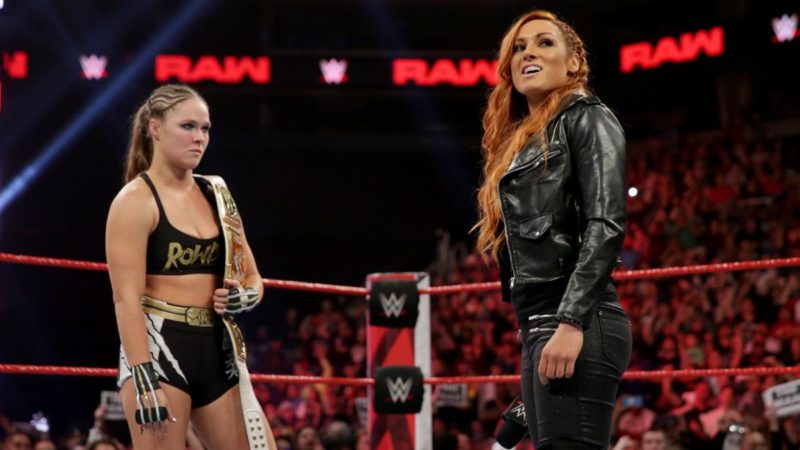 Ronda Rousey was ‘owned’ by Becky Lynch indeed – at least that’s what it will forever say on one fan’s piece of wrestling memorabilia. Taking to the Squared Circle subreddit by the name of RandomPersonHere123 posted one of their favorite pieces within their collection. A Becky Lynch signed Ronda Rousey Funko Pop figure that was signed prior to the Triple Threat Match at WrestleMania 35 where Becky Lynch faced Ronda Rousey and Charlotte Flair. On the box the inscription: “Owned By The Man” be seen prior to Lynch’s autograph being showcased front and center. Ronda Rousey and Becky Lynch have been training hard for their returns.

One fan responded, describing how that experience compared to one of their own as fellow Reddit user AcidFalconArrow said: “That’s actually amazing, i remember seeing a post on one of the old wrestling forums i used to go on, it was an autograph of Shawn Michaels on an 8×10 of Bret and it’s right over Bret’s face. i think the guy had pictures of both of them, but Shawn chose to sign the Bret one. it’s kind of a double whammy because then Bret had to autograph the Shawn one, i have no idea if the guy even tried to get Bret after that. i was so young when i saw it but i remember thinking it was fucking hilarious. Of course i didn’t know what Shawn was like outside the ring back then, especially since the post was in like 2008 when Shawn was already past that point of drug fueled cockiness.”

ObieFTGNobody chimed in by saying: “Wait…wasn’t the finish of that a botch, where Becky was supposed to pin Charlotte? So this was a premeditated move? I love Becky even more now…lol” While SaintRidleyEmpress put: “The only way the finish didn’t go as planned was Ronda getting a shoulder up during the count. Becky was meant to pin her, which was itself a change from her making Ronda submit.”