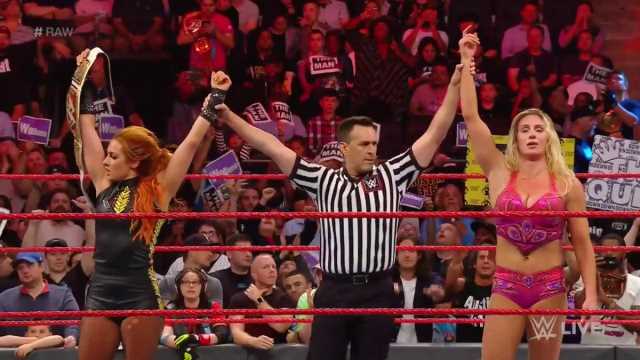 Becky Lynch became Becky Two Belts after this year’s Wrestlemania. There is a chance she might be carrying two titles again owing to her reunion with Charlotte Flair.

As shown on WWE’s preview of RAW, Charlotte Flair and Becky Lynch will team up again next week. Their opponents have not been announced as of yet. The company also noted their loss against the Kabuki Warriors for WWE Women’s Tag Team Titles.

Despite falling short of the WWE Women’s Tag Team Championships, Becky Lynch isn’t quite giving up on her dream to revive the legend of Becky Two Belts. This Monday, The Man will once again team with Charlotte Flair, her partner in last week’s ill-fated title bid. And after showing surprising chemistry with her longtime rival, The Man will once again pair up with The Queen.

With Survivor Series closing in, WWE seems to be teasing the return of Becky Two Belts. We will get to know what will happen in due time.