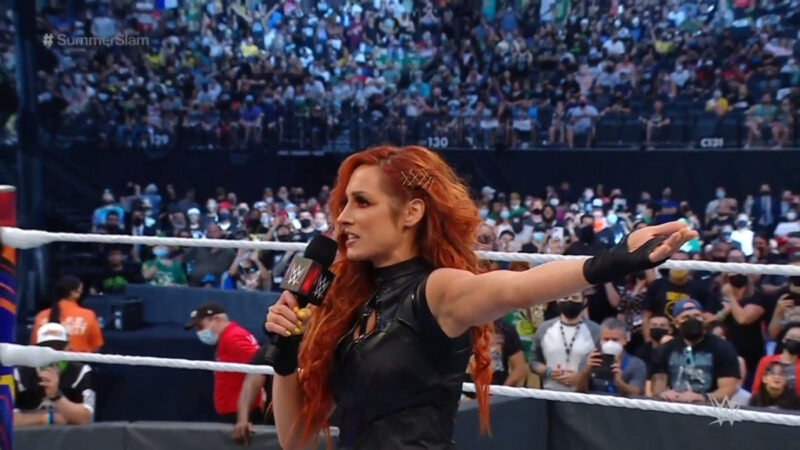 Claudio Castagnoli (formerly Cesaro in WWE) made his surprise debut at the recently-concluded AEW x NJPW: Forbidden Door pay-per-view. and the fans were left surprised. He had been not been particularly interested in wrestling since he left WWE when his contract expired in February. The former WWE RAW Women’s Champion Becky Lynch recently reacted to the huge moment.

Lynch exclaimed with a “Yes” on Twitter, tagging Claudio Castagnoli’s, and later posted a photo of the former WWE star from his debut in AEW.

‘Big Time Becks’ is not the only one to have reacted to the debut. WWE star Naomi is seemingly enthralled with the developments as well. ‘The Glow’ took to Twitter to celebrate the debut of Claudio. The former WWE United States Champion was revealed as the replacement of Bryan Danielson for the match against Zack Sabre Jr. at AEW x NJPW: Forbidden Door. ‘The Swiss Cyborg’ was one of the last people Danielson worked with in WWE and has been praised multiple times by the featured member of The Blackpool Combat Club. We had reported how he had been training for a return. Claudio has a history with Sabre Jr, as the two wrestled an Iron Man match in Westside Xtreme Wrestling. Danielson had stated on Dynamite that whoever his replacement will be the newest member of The Blackpool Combat Club.

The former WWE RAW Women’s Champion Becky Lynch is quite active on Twitter as she recently fired back at fellow WWE star Jaxson Ryker who spoke critically of her over her opinion on abortion. The US Supreme Court’s overturning of the Roe vs Wade decision has created uproar. Several WWE stars have voiced their opinions on the controversial decision, ‘Big Time Becks’ being one of them.