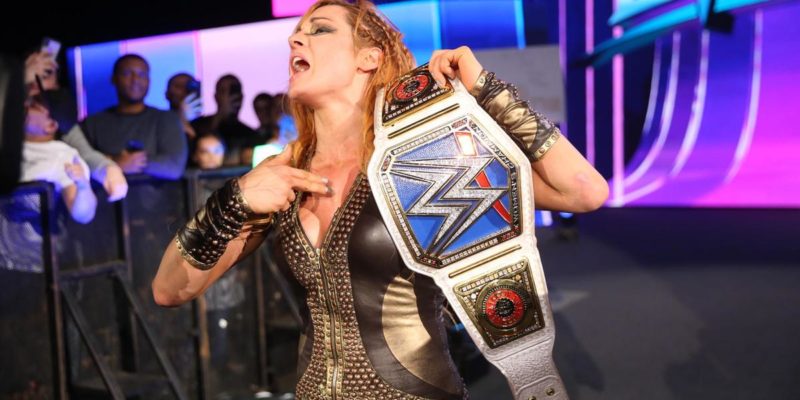 There is not another superstar in WWE that is clicking the way Becky Lynch is since turning heel at Summerslam a few months ago. Recently, the Smackdown Live Women’s Champion did an interview with Gorilla Position, and talked about her recent climb to the top, her feud with Charlotte Flair, and her upcoming match with Raw Women’s Champion, Ronda Rousey, at Survivor Series.

When asked about the backstage reaction to her new attitude and what took The Lasskicker so long to be given the brass ring, Lynch didn’t hold back her words.

“I don’t think they knew I had all this angst and all those feelings inside me that have been coming out and it’s all just being frustrated, but that’s real and that resonates with people and people can relate to that,” she said. “People feel that all the time and I think that’s why it’s working because it’s real.”

Lynch also had some high praise for her feud with Charlotte, and thinks the time their feud got helped tremendously in telling the story they wanted to tell.

“Yeah, I think sometimes there’s just so much, you know what I mean? We had Super Show-Down and we had Hell in a Cell, and we had Evolution, and we had all these things and we’re going into Survior Series and sometimes it’s hard to develop storylines to go into all those pay-per-views at once,” Lynch responded. “So, sometimes they get a shorter build-up and luckily myself and Charlotte was able to get such a long feud. I think that was because it wasn’t one week, or one month, or one year in the making, it was years in a making.”

Finally, Becky had some harsh words for her Survivor Series opponent, Ronda Rousey.

“[Ronda Rousey] is based on being strong, dominating people, and running through them and that’s not how I was built,” Lynch said. “I’m not scared of losing and I have been taking a beating my entire life and I came back from them time, after time again, and that’s why Ronda has to be scared.”

Lynch and Rousey will square off this Sunday at Survivor Series in one of the more anticipated women’s matches in recent memory. See Becky Lynch’s entire interview in the video below.