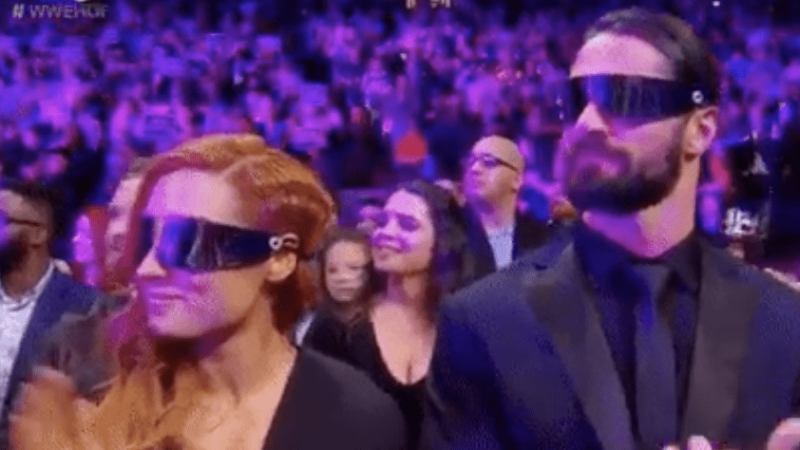 It’s been rumored for a while now that the Raw & SmackDown Women’s Champion Becky Lynch and the Universal Champion Seth Rollins have been an item for some time. They’ve been seen together at several events, including this year’s WWE Hall of Fame ceremony, while also popping up on each other’s social media accounts.

Now it seems that Becky 2 Belts may have confirmed their relationship in a teasing Twitter spat with WWE Hall of Famer Beth Phoenix. The WWE is currently touring in Europe, and Lynch tweeted out a photo of her and the Glamazon at one of the events with the caption, “Don’t get too close to that title, Beth Phoenix.”

Phoenix mentioned that she and Lynch are tied up for the number of title reigns in their careers. Lynch responded, stating that they’re “neck and neck” while posting a picture of herself and Phoenix’s husband and WWE Hall of Famer Edge.

The Rated-R Superstars jumped in on the conversation at this point, claiming that her original entrance looked a little similar to the one he used to do.

Yeah, no, you’re right, Edgester. They want me to be nicer on social and I forgot. On this day, I see clearly.
Everything has come to life. Pals?

Beth Phoenix asked later on if they were bringing their significant others into the situation. Lynch’s response?

Rollins has yet to comment on the situation, at least not on Twitter. He’s been confronted a few times, most recently in a phone conference where The Express reported he attempted to dance around the question, stating “I’ll leave that one up to you.” Now, though, it looks like the two champions are officially a couple.