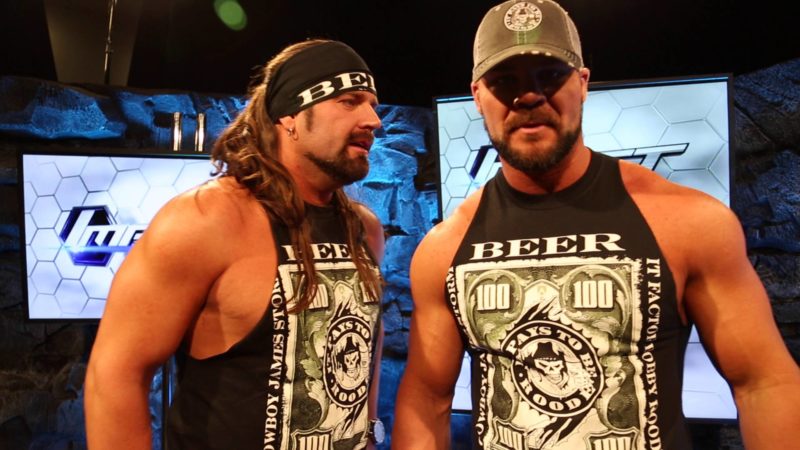 Beer Money (James Storm and Bobby Roode) recently spoke with Royal Ramblings of the Huffington Post during the recent TNA UK tour. Here are the highlights.

With TNA on an upswing what’s your advice to the creative team to keep viewers?

JS: Just consistent storylines. There’s been a lot of times here in TNA where things have been hot-shotted or just rushed. When I was growing up watching wrestling, story’s took a while. In this day and age, with TV and TNA not running as many Pay-Per-Views as other companies, storylines are kind of rushed. I think when they’re really good and drawn out that keeps the audience involved.

BR: the storylines are really important. Wrestling has changed so much with TV – its wrestling for the ratings now. So it’s hard not to hot-shot an angle sometimes but it would be nice for a story to evolve. James and I, our story lasted over a year and it was an intriguing one. If it lasts over a year and a half people can sink their teeth into something. Already people are saying they want to see us wrestle the wolves but that’s something you can build up to and get to that point.

Does taping shows before they are broadcast put TNA at a disadvantage?

JS: Growing up, there wasn’t  social media and things weren’t taped months in advance and that was a great thing. I think if social media was around then, I wouldn’t go online to read the sports because I wanted to be surprised. If you read the spoilers it’s like you’re ready to go see the new Star Wars movie but you know the ending! Its not as good! Me, as a wrestling fan, I don’t want to know what happens.

BR: These days you’re used to spoilers – that’s fine to go read it. I read about the Royal Rumble and saw AJ was in it, so I’m going to go watch it. AJ’s a friend and I’m interested. I know what happened but I still want to see it. If I read that Beer Money is facing the Wolves on TV, I’m still going to want to watch it because I know it’s going to be a good match. Same with Matt Hardy beating EC3. If you’re a real wrestling fan, you’re going to watch it.

TNA has new contracts with different independent bookings systems – are you happy with them?

JS: I think it’s a good thing. It helps to get the name of the wrestler out but also helps the company out. I think it would be good if they had more TNA championship matches outside the company. Back in the day, I grew up with USWA – the territories – and the NWA champion would come to the territories and I think TNA could do that too. Matt Hardy defending, the Wolves- it elevates their importance.

BR: Yeah, TNA going to a show, it helps promote the brand. The brand has been damaged in the last couple of years so if we start going out on the road and making good television like we are, I think the brand will take care of itself.