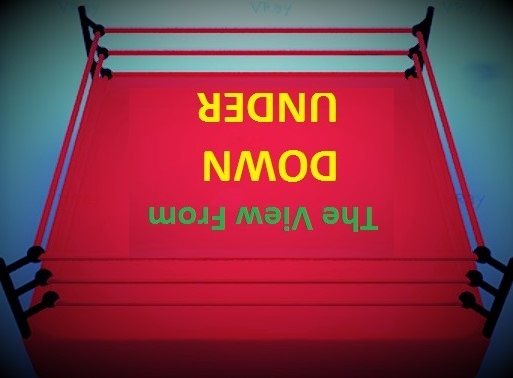 While the dust is still settling down on the October 6th 2018 WWE Super Showdown in Melbourne, it is as good as time as any to look back at the WWE’s first big event held in Australia, The 2002 Global Warning Tour. In the 16 years between shows the WWE has toured Australia, travelling to most capital cities for house shows. While The Global Warning tour was not a Pay Per View event, however it was released on DVD 2 months after the event. 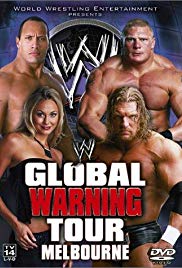 While numbers for the Super Show-down may have been slightly below expectations, The Global Warning Tour sold out the (now named) Etihad Stadium with 56 734 in attendance. This was a long standing record for this stadium. The anticipated main event was changed due to Hulk Hogan pulling out of the tour, which left us with a mouth-watering Triple threat match between Champion The Rock, Triple H and Brock Lesnar.  The rest of the card included major stars such as Edge, Chris Jericho, Kurt Angle, Christian and Rey Mysterio .

This was such a big moment for professional wrestling in Australia. Prior to this show, WCW did a set of Thunder and Nitro tapings in 2000, and the I-Generation Superstars of wrestling toured in 2001 which included the main event of Kurt Hennig vs Dennis Rodman, and former WWE starts One Man Gang and Tatanka. Before that 1985 and 1986 the WWF toured Australia with Andre The Giant and Big John Studd headlining the tour in 1986. This made this WWE Global Warning Tour the biggest thing for Australian professional wrestling since the glory days of Australian wrestling in the 1960’s and 70’s. 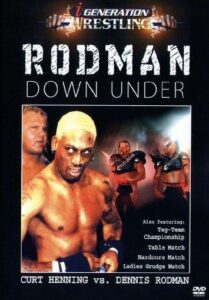 The upshot from the WWE Global Warning tour was massive boost for the local industry as well, with more local promotions arriving on the scene and most of the current local independent promotions across the country seeing an increase in fan base. More importantly, for Australia’s local scene,  a new generation of wrestlers, inspired by the WWE Global Warning, began filling the local promotions, and while at The Super-showdown  Buddy Murphy and the IIconics Billie Kay and Peyton Royce represent Australia, locally the talent performing week in week out is equal to that of other independent promotions across the globe.

Not all matches held at the WWE Global Warning tour made the DVD, but for nostalgia purposes, here is a quick recap of the

Stephanie McMahon opened the night by thanking the fans before having a pre-match dance with Riskishi.

Match 1 “Kiss my Ass Match” where Rikishi defeated Rico. As per stipulation Rico had to kiss Rikishi Ass at the end of the match, refused and tried to attacked Rikishi instead. Rikishi countered the attacked, and performed his trade mark ‘stink face’ on Rico.

Match 3 Jamie Noble (with Nida) defeated Hurricane Helms to retain the WWE Cruiserweight Championship. A very high energy back and forth match which ended by a distraction by Nida, and a roll up and feet on the ropes pin for Noble. Hurricane get some revenge by chokeslaming Noble before leaving,

Match 4 Chavo Guerrero & Hardcore Holly (with Maven) defeated Billy and Chuck (with a beat up Rico). Holly got the pin for his team after an Alabama slam on Billy

Match 6 Lance Storm & Christian defeated Billy Kidman & Rey Mysterio to retain their World Tag Team Championships. Kidman and Mysterio with the biggest pops so far in the night. Just like the cruiserweight match, a very high energy match, before Lance Storm used the belt to gain victory for his team.

Match 7 Edge defeated Chris Jericho with a roll up after a very intense match with several near falls, a knocked out referee and 56 000 people screaming “Jericho’s a Wanker!”

Main Event The Rock defeated Triple H and Brock Lesnar to retain the WWE Undisputed Championship. All 3 combatants hit the finishers and had several near falls. After the match Paul Heyman tried to attack The Rock. The Rock retaliated with a Rock Bottom and Peoples Elbow..and just for good measure, Triple H also delivered a Rock Bottom and Peoples Elbow. 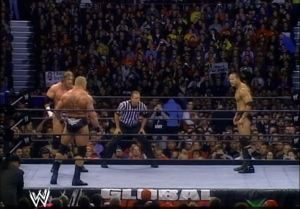