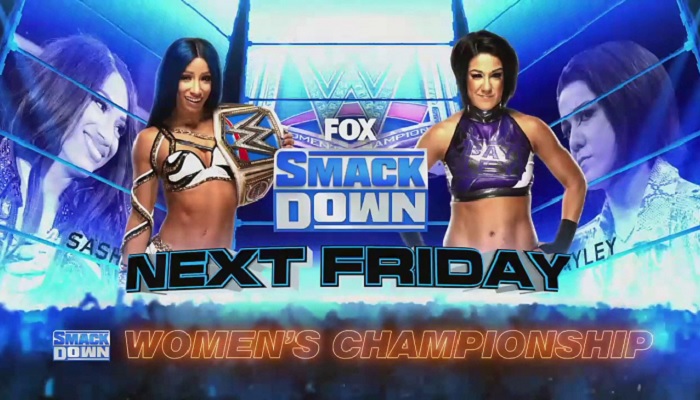 Banks vs. Bayley II announced for 11/6

A big title rematch from the WWE Hell In A Cell 2020 pay-per-view has been announced for the first episode of WWE Friday Night SmackDown of the month of November.

On the post-Hell In A Cell 2020 episode of WWE Friday Night SmackDown on FOX, it was announced that “The Boss” Sasha Banks, who won the SmackDown Women’s Championship from Bayley at the aforementioned annual WWE PPV event, will defend the title in an immediate rematch against the former champion.

The 10/30 episode of the weekly blue brand program saw the Sasha Banks vs. Bayley rematch for the SmackDown Women’s Championship officially confirmed for next week’s show, which is scheduled to emanate from the ThunderDome inside Amway Center in Orlando, Florida next Friday, 11/6.

Check out the official announcement regarding Banks vs. Bayley for the SmackDown Women’s Championship courtesy of the WWE on FOX twitter feed below.

They tore the house down at 'Hell In a Cell' and we're going to see it again in one week.@itsBayleyWWE vs. @SashaBanksWWE for the #SmackDown Women's Championship NEXT FRIDAY on FOX. pic.twitter.com/H8ct3FDCuv