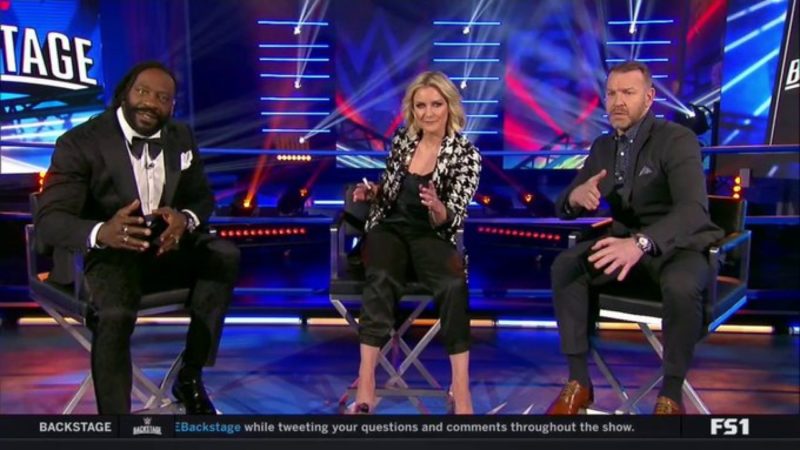 WWE Backstage used to air on FS1 every week and it was well-known for its interviews with Superstars. It also featured CM Punk making periodic appearances which many fans enjoyed. However, the show was ultimately cancelled.

Booker T on his podcast, The Hall of Fame, talked about the show being cancelled. He thanked everyone who worked with him on the show and also expressed his enjoyment in working.

“I just want to first and foremost thank everybody on my FOX family crew [for] making that thing work for eight months,” Booker T stated. “It was an awesome eight months, and hopefully, now that the project is going to be different, it will be going to something digital. We don’t know just yet. We’re just waiting in a holding pattern right now, but I just want to thank everybody who had something to do with that show and everybody who made it possible for me to go out there to do what I love doing which is talking and having fun.”

Booker T mentioned how he liked the fact that the show revealed inside knowledge from those working in the industry.

“More than anything, in a show like that, I think it’s something that is needed,” Booker T said. “That stuff I did last week with Bret Hart, man, it really touched me because I never knew that if Bret Hart had the chance to do it all over again, he would’ve said, ‘man, I’m staying here in the WWE. I’m not going down there.’ Stories like that, for people to hear up close and personal from someone like myself and Bret who was in the game, I thought it brought something different to the table. Again, everybody in the FOX family, they treated me right. Hopefully, we’ll be back on track real real soon and doing it again.”

He was asked by Brad Gilmore if there were any changes in the show he would have liked. Booker T joked about not changing promo school and then wished they could have discussed various topics outside of WWE, such as indie wrestling.

He ended by saying he was very close with everyone on the show and how no one was happy that WWE Backstage was coming to an end.

“There’s still so much more out there to be done,” Booker T said. “I’m like a chameleon. I’m always trying to change my spots. I’m just gonna miss the comradery of being the avocado room hanging out just laughing to the point where I would be crying so bad I would have to put Visine in before the show because my eyes would be so red from crying, but that was before the show even got started.

“When I got the phone call, we jumped on the call together, and you could tell [from] everybody in the room [that] nobody felt good about it. A lot of times with some of these shows I’m sure a lot of times they’re like man, I couldn’t wait to get over with that show, but this one right here felt so genuine and heartfelt.”