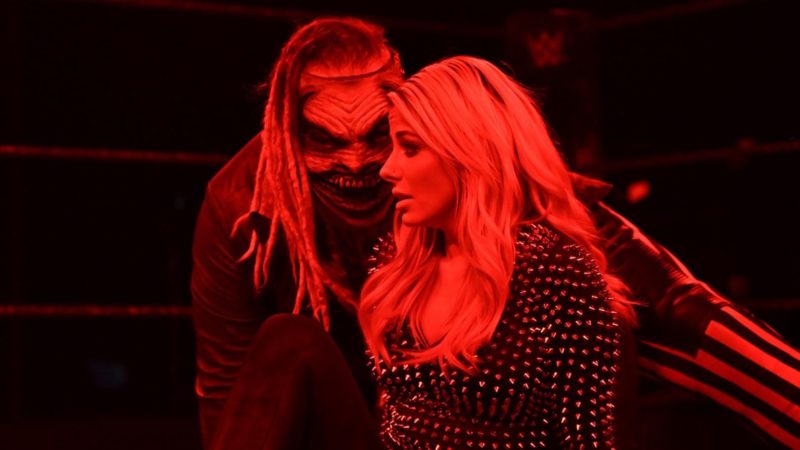 Braun Strowman started his WWE career by Bray Wyatt’s side as part of the Wyatt Family. Later on as a singles star, he partnered up with Alexa Bliss for a Mixed Match Challenge. WWE teased a romance storyline between the two as well.

But things have turned around completely ever since, with Alexa Bliss now aligned with Bray Wyatt’s The Fiend. Speaking with Sportskeeda’s Rick Ucchino, The Monster Among Men shared his honest opinions about Wyatt and Bliss’ character transformations.

Braun Strowman on The Fiend and Alexa Bliss

Strowman competed in a Swamp Fight with Bray Wyatt at The Horror Show at Extreme Rules in July. At the end of the match, Wyatt emerged out of the water as The Fiend, as everything else turned red.

Later on SmackDown, Alexa Bliss came across The Fiend. She has aligned with him ever since, having undergone a complete character change herself. The two appeared on Monday Night Raw this week and delivered a double Sister Abigail on Andrade and Zelina Vega.

Strowman shared his thoughts on the new persona of Bray Wyatt and Alexa Bliss. He said that watching those two perform together felt like “watching Satan come to life”.

“I’ll never be finished with Bray Wyatt… Bray Wyatt is the father of the monster. It’s hard to be around him. I tried to be a good person. I tried to do good things. Unfortunately, I’m also really good at doing bad things to people. Bray Wyatt is the haunting element. I have nightmares about him. I have fears of being drawn back into that swamp and turning back into what I used to be. I’d be a liar if I say I didn’t watch that entire segment with Alexa [Bliss] and Bray because it’s mortifying seeing her change because the Alexa I knew was a sweet person – and to see her changing like this and those guys getting the double ‘Abby’ made all the hair on my body stand up and this eerie feeling in my stomach like I’m watching Satan come to life.” h/t Sportskeeda

On the Swamp Fight with Bray Wyatt

Speaking of the Swamp Fight, Strowman admitted that he never wants to do one of those ever again. He said he lost a part of himself in the match. He terrified what more might happen if they go at it again.

“I left a part of me in that match. A part of my soul was consumed in that match. Not just physical, but the mental aspect of what it took to make that happen is just…I don’t ever want to have to do it again. Bray Wyatt is and always will be very special to me – but The Fiend is a completely different entity. The words Alexa Bliss used, he’s ‘intoxicating’. Something about the aura of The Fiend. It’s like a moth drawn to a flame and it calls to me and it terrifies me. It terrifies me about what could happen if I go home. If the Monster Among Men turns back into what he is and becomes partners with ‘The Fiend’. That’s what scares me.”

Both Wyatt and Strowman have been drafted to RAW last week. Fans can expect their feud to be re-ignited on the Red brand, with Bliss adding a new edge to the storyline.