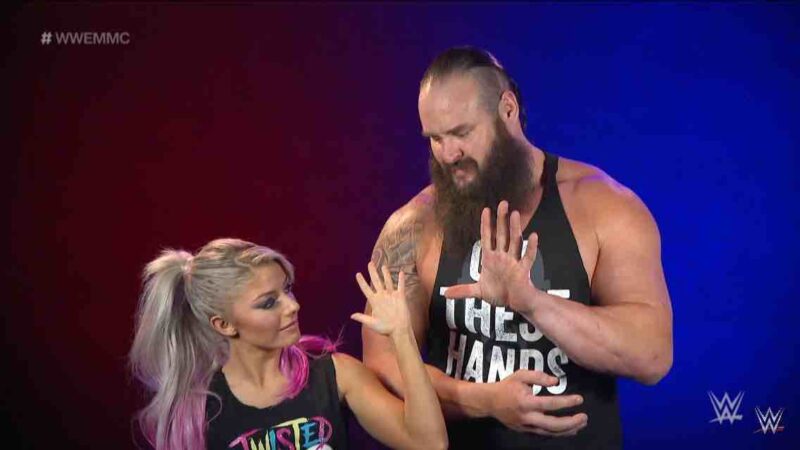 It is needless to mention that the former WWE star Braun Strowman(now Adam Scherr) and Alexa Bliss share a great friendship. They had impressive on-screen chemistry. They teamed up as Team Litle Big in the Mixed Match Challenge and off the screen they are same as well. ‘The Monster Among Men’ recently shared a picture on his Twitter account and it features Bliss dancing with him. Strowman was recently part of Bliss’ wedding to Ryan Cabrera, which is where the photo was taken. Bliss and Scherr were seen dancing at her wedding and noted that they are “besties forever.”

Bliss had also reciprocated the same feeling. Here is the Tweet which you can see below:

Bliss recently married Cabrera, while Scherr has been in a relationship with current WWE star Raquel Rodriguez for around a year. The 38-year-old star was a surprise release from the company last year and has since continued to wrestle on the independent circuit. In February this year, Scherr, along with fellow wrestler EC3, announced their own wrestling promotion called Control Your Narrative (CYN).

Bliss had been quite upset with Strowman’s release. Who knows he might even make his return to the company. Dakota Kai, who was previously released made her return at SummerSlam and there have been reports that Hunter might bring back some more released stars.  Fans have been wondering if the former WWE Universal Champion will be brought back.

A fan recently asked former Universal Champion Strowman about the chances of him going back to WWE with Triple H in charge now.

“Is there any chance of you going back to wwe now that hhh is in charge of creative, it seems like they’re moving in the right direction,” asked the fan in his tweet.

Strowman replied to the same with the typical professional wrestling quote of “Never say never”, keeping the door open for a future WWE return.