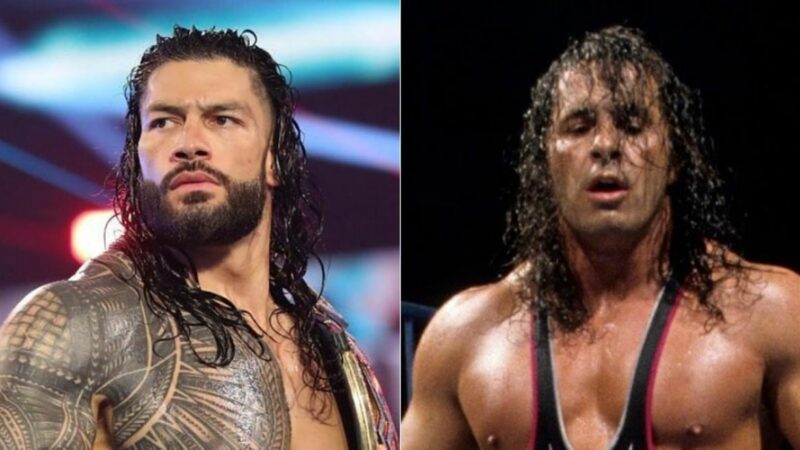 Bret Hart, Paul Heyman, and Michael Hayes helped put together Roman Reigns vs. Drew McIntyre at WWE Clash at the Castle, as seen in a photo below. Reigns is rumored to face The Rock at WrestleMania 39.


Roman Reigns with Bret Hart, Paul Heyman and Michael Hayes prior to his match #WWECastle.

WWE Head of Creative Triple H recently had announced his retirement earlier this year due to some health scare in the past. ‘The Game’ recently revealed that there were plans in place for him to compete at WrestleMania 38. However, the plans were scrapped following his serious cardiac event in the fall last year.

Triple H comments on the plans that were nixed

Hunter said there was an idea for something between himself and Gable Steveson at this year’s WWE WrestleMania 38 before his health issues made that a no-go.

“There was a plan for me to do something at WrestleMania that we had talked about. I was going to do something with Gable Steveson and try to get him launched and get going,” he said.

In an interview with BT Sport’s Ariel Helwani released Friday, ‘The Game’ spoken openly about his cardiac event, which happened one year ago. After retelling the story he discussed with ESPN’s Stephen A. Smith earlier this year about what led to his initial heart failure diagnosis, he then went into the two surgeries he had that lasted longer than expected.

After suffering a “slight v-fib” (a fluttering of the heart), he was told he would need a defibrillator. He then needed two different surgeries to have it put in. The first took seven-and-a-half hours and was filled with complications. The device still didn’t work, however, and he would have to undergo another surgery the next day which took over eight hours.

At the end, the device was functioning properly:

“15+ hours of surgery in two consecutive days with all this digging. And it was all stuff like I’m too vascular from years of training, my fascia tissue is too thick, the digging is incredibly difficult. All these little things. Every issue they could have had, I had,” he said.

During the months he recovered, he said he was not involved with WWE and didn’t watch the product.

“(I) just was done with it for that period of time. Being back for WrestleMania, coming back, engaging back into it, was awesome and amazing.”

Levesque noted that before he returned to the company, he underwent a medical checkup and received a clean bill of health.

“Before I come back at WrestleMania, I go to the doctor and get the check-up and they walk into the room and say, ‘your ejection fraction is over 50.'”

He continued to say doctors weren’t sure if his heart would reach that level again.

“That’s like, you’re 100%, clean bill of health, here you go, do whatever you want. That’s a game-changing moment,” he continued.

Hunter is at the helm now and has already made some changes in the company following the Vince McMahon’s retirement.