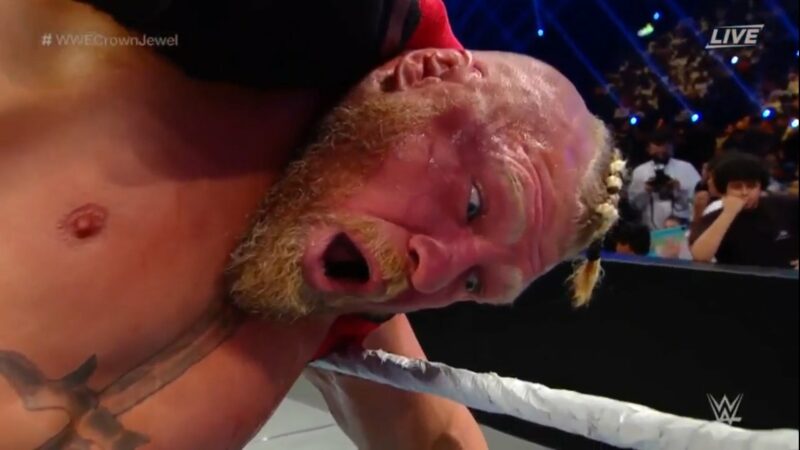 Bobby Lashley and Brock Lesnar opened the WWE Crown Jewel event this year. This was the second encounter between the two superstars. The first one happened at the 2022 Royal Rumble in January, and it saw Lashley defeat The Beast to win the WWE Championship.

Brock Lesnar won this match tonight, but the ending was botched, and the fans could not accept the match’s outcome. It was the opening contest so everyone wanted it to be an excellent match. It was a perfect match and the WWE delivered on that aspect, but the ending shocked everyone.

Fans were perplexed by what transpired. It was clearly visible that Bobby Lashley’s shoulder wasn’t on the mat, but the referee counted to three and gave Lesnar the win. While some wrestling theorists also believe this is a step to take this feud to Survivor Series, others blame the referee for counting the match to the mat.

It’s clear that with this match the numbers are evened and both the superstars have their own win against the other. It would be interesting to see how the storyline develops in the coming weeks and months as the two have had their own fair share of situations.

I doubt the match, was suppose to end like that #LashleyvsLesnar #WWECrownJewel

I doubt the match, was suppose to end like that #LashleyvsLesnar #WWECrownJewel

WWE knows that the two are money-making propositions, and they would love to see them fight it out between the ropes. If the matches can be done on more than one occasion then the company would try to make that attempt and it looks like they did just that.

What are your thoughts on the ending of the match? Sound off in the comments.