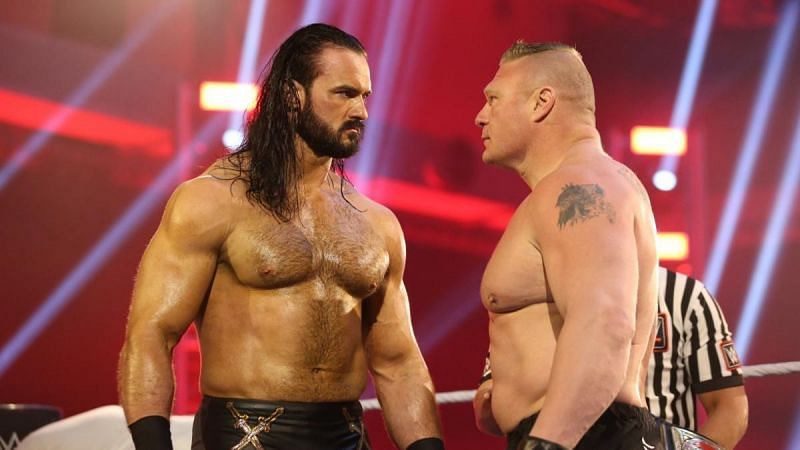 During a recent edition of WWE commentator Corey Graves’ highly successful ‘After The Bell’ podcast, he, along with fellow WWE personality Vic Joseph discussed the possibility of Hurt Business member Bobby Lashley becoming WWE Champion next week on Monday Night Raw. Graves was enthusiastic to the idea but questioned who would be the first person in line to face Lashley should he become WWE Champion, not McIntyre. This lead Joseph to say ” I think there’s an obvious answer that’s floating out there, but I’m not going to give that obvious answer.” Bruce Prichard ‘burying’ Drew McIntyre was just revealed.

This lead Graves to pounce and respond back by saying: ““I am, I am, Brock Lesnar.” Bobby Lashley Vs. Brock Lesnar has been a match that has been heavily rumored to take place for a while as the Hurt Business member has stated his desire to face ‘The Beast’ in one-on-one action at WrestleMania.

Lashley got the opportunity to face current WWE Champion, The Miz during a backstage dealing at the Elimination Chamber pay-per-view event which saw Bobby Lashley decimate now-former WWE Champion Drew McIntyre after ‘The Scottish Warrior’ won the Raw Elimination Chamber match. This lead the Miz to cash-in his Money in the Bank briefcase on a tired and beat down McIntyre to become a two-time WWE Champion.

It was the next night on WWE Raw where Lashley gave Miz an ultimatum, to give him a WWE Championship match or face the consequences. The match was made for this upcoming week’s edition of Monday Night Raw which will see The Hurt Business member and former United States Champion take on WWE’s resident A-lister. Jon Moxley’s bold text message to The Miz after his title win has leaked.

In other news regarding Brock Lesnar, during a recent edition of the hit-podcast, 83 Weeks, former WCW Executive Eric Bischoff discussed Verne Gagne and his legacy in the world of professional wrestling. In addition, Bischoff told Conrad Thompson how Gagne pitched Brock Lesnar to him.

“I remember one of the last conversations I had with Verne – this will put a time frame on it – was Verne calling me and pitching this guy named Brock Lesnar. Whatever year that was when Brock was graduating or shortly thereafter – Verne was so close to the University of Minnesota wrestling team. He was really close with the coach there. Obviously, Brock was a big star there, and Verne thought for sure that Brock could be a huge star.” Brock Lesnar Vs. Bobby Lashley has been pitched for WrestleMania 37.

Credit to ThirstyForNews and 411Mania for the quotes.