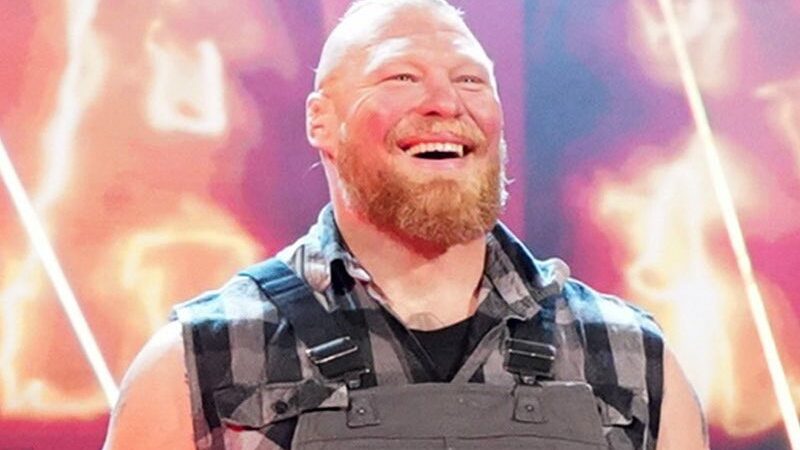 Brock Lesnar revealed on The Michael Kay Show that Courteney Cox’s character Monica is his favorite on the show Friends.

When asked about his favorite TV shows, he said he doesn’t watch much, but he’s seen two popular sitcoms. Wrestling-Edge transcribed his remarks.

“Yeah, Seinfeld, catch a little bit of Friends once in awhile.”

When asked his favorite Friends character, he responded, “Is it, Monica?”

Brock Lesnar is currently the WWE Champion and he is a top star of the company. In his early days as a WWE star, he was full of potential and went on a meteoric rise in the company. But, he decided to part ways with the company in 2004 amid his success. Recently, WWE Hall of Famer Kurt Angle recently on his podcast on AdFreeShows.com, spoke about Lesnar’s departure from WWE and revealed a conversation with him.

‘The Beast Incarnate’ had infamously decided to quit WWE after experiencing a quick rise to main event stardom. It was noted that Lesnar was not happy with WWE’s rigorous travel schedule and was eyeing a jump to the NFL following his sudden WWE exit.

However, it was a small tip of advise from ‘The Olympic Gold Medalist’ that made Lesnar wait until WrestleMania 20 before informing the office about his decision to walk away. Lesnar, however, was in a hurry to depart the promotion. Here is what Angle recalled:

“Brock had a private conversation with me about a month before WrestleMania, and he told me he wanted to try out for the NFL and that he didn’t like the travel WWE produced for him every year. He just didn’t want to be on the road that much. He told me he wanted to try out for the Minnesota Vikings. He actually contacted the recruiter, and they were interested, and so he asked me, ‘What should I do? Should I tell Vince now, or should I wait?’ I told him, ‘Listen, if I were you, I’d wait till after WrestleMania and then tell Vince that you’re unhappy and you want to leave the company.’ But Brock decided to go back home, and he told Vince right when we got back home from the tour when he was talking to me on the tour, that’s when he told me about him wanting to leave.”

Angle said that Vince was “hurt” by the talks but it made his job easier in the booking department as Lesnar took the loss to Goldberg at WrestleMania XX. Angle even admitted that Vince could sometimes be unforgiving towards talent. He said:

“He ended up contacting Vince, and that’s what enabled Vince to decide that Brock would do the job. Vince already knew Goldberg was leaving, he didn’t know Brock was leaving at this particular time, but when Brock came home from that tour and told Vince, it hurt Vince. It stun him. So everybody knew that you know Brock was leaving, and Goldberg was leaving, most likely Vince is probably going to stick it to Brock because Brock was younger. He was full-blown WWE. He was WWE his whole career. Goldberg came from WCW. So, you know, Vince, when you’re part of his company, you start out, he wants you there forever. When you leave, Vince can be a little bit unforgiving.”

Lesnar is set to face WWE Universal Champion Roman Reigns in a ‘Winner Take All’ Match at WrestleMania 38.