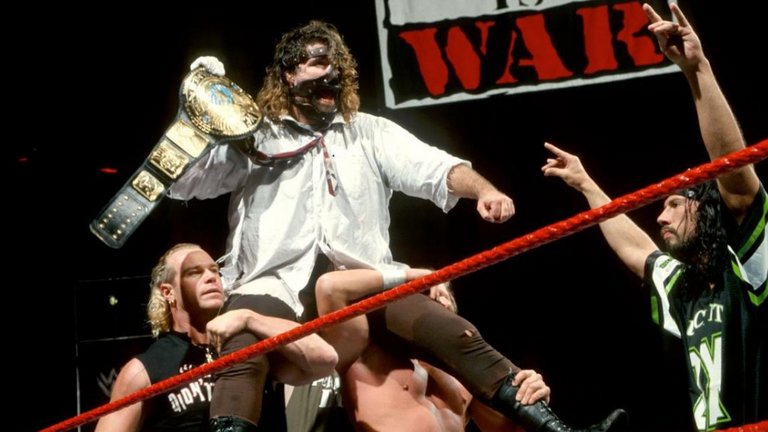 One of the most memorable episodes of Monday Night RAW came in early 1999 when Mick Foley won the WWE Championship as Mankind, where the crowd gave one of the biggest pops in the company’s history.

WWE was still pretaping shows back then and that RAW was taped in advance as well. On Something To Wrestle with Bruce Prichard, Prichard discussed why WWE had Foley win the title on a taped Raw and not on pay-per-view.

“I think it worked, first of all. We were looking at being as competitive as we could. We were in a war [with WCW Nitro], so everything that we did I would dare say that Vince McMahon looked at every single show and wanted to pull out all of the stops. This was an opportunity to do just that. Whether it was this week, next week or the week after, Vince McMahon looked at it as an opportunity to do everything we can every week and whatever we do this week we have to top it next week.”

The Attitude Era was the time where the likes of ”Stone Cold” Steve Austin, The Rock and DX were the mainstays of the company. So, Foley winning the championship was certainly unexpected to many. Prichard admitted that he had to convince Vince McMahon so that Foley could win the title.

“First of all, the [Mankind] mask thing was a combination of Jim Ross and myself to soften that pitch to Vince McMahon a little bit since he didn’t like Mick Foley’s face. So, we thought, okay, we can cover up the face, that’s easy to do, but the bell rang and you saw every single night Mankind was going out there and stealing the show no matter the opponent. Vince McMahon had seen how Mick worked with The Undertaker and how he worked with Shawn Michaels, and no matter what situation you put him in he would excel.

“So, it was, again, here was Mankind, and having that s**t about Dad with Steve Austin prior to this, the audience loved him and fell in love with him. They kind of felt that he is not the stereotypical guy, it was perfect. If you were to ask in a poll with everybody in the locker room who did you think was more deserving to have that championship, I think everybody in that locker room would say that Mick Foley was, and the audience felt the same way.”

Before Foley’s title win, WCW announcer Tony Schiavone spoiled the title change on a live episode of Nitro. This, in turn, made fans tune into RAW instead of Nitro to see Foley become WWE Champion. Prichard was asked if that signalled the beginning of the end of WCW.

“I believe it was. The end was coming anyway. It was all a downhill slope regardless at that time. They just weren’t doing anything to get the momentum back any other way. When you look at all those decisions at the time, Eric Bischoff has to take it all.