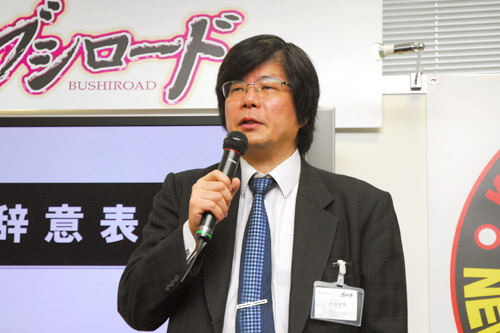 The President of Bushiroad (NJPW’s parent company) Takaaki Kidani has posted a new blog on the promotion’s official website talking about video games and content. He addressed rumors of WWE and NJPW working together.

There have been some rumblings online that Kidani mentioned in that blog that WWE offered a deal to NJPW to use their footage on the WWE Network.

Kidani stated that they should create a product of their own that is competitive to WWE’s and that NJPW should be as good as WWE when it comes to the production of their content.

Here is what Kidani wrote about WWE:

Story is it, but there is a flow of the world single market of even professional wrestling industry, there is still a sense of crisis in the New Japan Pro Wrestling, which is said to popularity was revived.

American WWE is not only box office revenue and broadcast revenue, it has been growth in sales of network distribution. Strongest wrestling corporate world is, I mean that at the same time deliver the best entertainment in the world. New Japan Pro Wrestling also increase the membership of the net delivery You are about Utteeyo in the world, but it can not even keep up with the WWE if you are relaxed.

How confront the strongest rival such as “MTG” or WWE? Presentation of the view of the world and the future, such as the fight table also, is one of such strategy.

We should create an environment in which entertainment themselves offer is accepted. If not care just movement of large rival looming, it will lose by turning to iron.

Business is war. Bushiroad is still a small challenger. For a new project from the beginning of the year, we will talk with recital of November 17. Please expect all means.