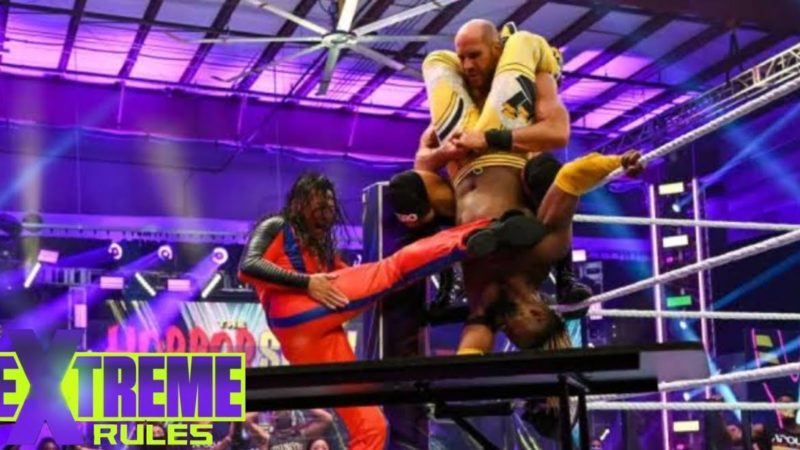 At The Horror Show at Extreme Rules, Cesaro and Shinsuke Nakamura captured the WWE SmackDown Tag Team Titles. Cesaro has been a part of a handful of teams that have taken the gold away from the New Day, and he’s accidentally found himself to be one of their biggest rivals in the past several years.

In an interview with Newsweek, Cesaro spoke on winning the belts with the King of Strong Style.

“It feels great. This is my seventh title with my third different partner. I call Shinsuke, ‘Shinsuke the Third.’ It came at a great time and me and Shinsuke were out to make a statement and I feel like we did and it feels good to hold gold again in WWE.”

When asked about what makes Nakamura different from the rest, he said:

“Shinsuke is the ‘King of Strong Style’ and he is so much fun to watch. I catch myself on the apron just watching him sometimes and having a great time. He’s a once in a lifetime performer. The way he moves, his moveset, his strikes, his background is mesmerizing. Shinsuke is the coolest person that I’ve ever met. Everything he does, wears and says makes you say, ‘Yea!'”

Cesaro’s success as a tag team competitor is quite impressive considering he’s won so much gold with different partners. When asked what makes him an ideal tag partner, he stated that he’s the secret ingredient to bring out the best in his partners.

“Because I’m extremely humble, I can say that I’m extremely good [Laughs]. I consider myself a specialist so whatever task you give me I’ll make the absolute best out of it. For me I’ve been lucky to be teamed with extremely talented tag team partners. With Shinsuke I have lot of respect for him, and I had a lot of respect for him for a long time before his career with WWE. I like to think of myself as the magic seasoning, the magic ingredient that makes a dish better. I push myself extremely hard and I like to think that I push my partners and opponents as well to bring the best out of everybody.”

Tonight marks the first episode of SmackDown since Cesaro and Nakamura won the gold. We’re sure to see some big celebration from the men formerly known as the Artist Collective.