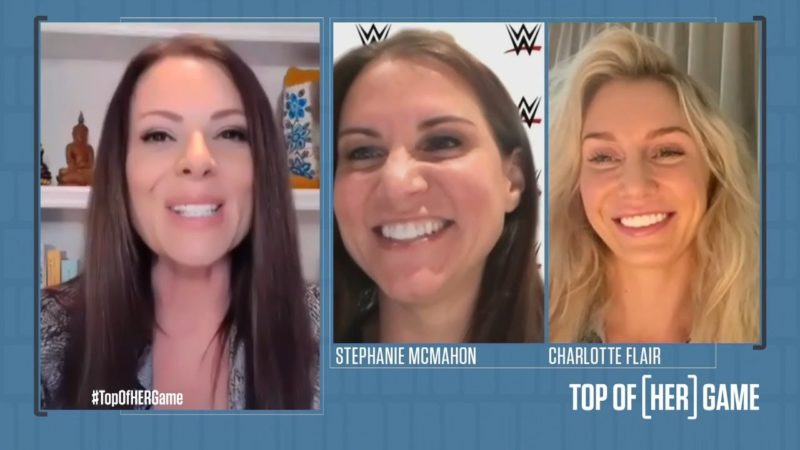 Stephanie McMahon and Charlotte Flair joined Sportsnet reporter Tara Stone for the debut edition of the new digital series, “Top Of Her Game.”

The new show is described as “a series to empower women and shine a spotlight on female thought-leaders,” and the debut episode featured Stephanie McMahon and Charlotte Flair appearing live simultaneously, answering questions from Stone about a wide-variety of topics.

Featured below are some of the highlights of Charlotte Flair talking about the “#GiveDivasAChance” social media movement, the rise of the “Women’s Revolution” and the reaction behind-the-scenes from the male Superstars to the female Superstars “fighting for more than just secondary story lines.”

On the reaction behind-the-scenes leading up to and during the #GiveDivasAChance social media campaign that led to the “Women’s Revolution” in WWE, and in pop culture in general:

From everybody [there was support] because the men could see us putting in the work. And also, when you’re a man who has a little girl, who would you want your little girls to look up to than the females you work beside? I’m not saying it was just handed to us. It really took a culmination of years before me. And then, in 2015, when the #GiveDivasAChance trended, and the fans were fighting for us, and the company going, ‘Hey, we’re going to give it a shot.’ It was just the right place at the right time.

On fighting for more than “just secondary story lines” and whether or not there was resentment from the male Superstars behind-the-scenes in WWE:

Check out some clips from the interview below. The complete interview is available at Sportsnet.ca.

Find something you’re passionate about 💛 https://t.co/xcUROJv64d

In the debut episode of @Sportsnet’s Top Of Her Game, a series to empower women and shine a spotlight on female thought-leaders, @TaraSlone was joined by @WWE Chief Brand Officer @StephMcMahon and 10x
WWE & 2x @wwenxt Women's Champion @MsCharlotteWWE.https://t.co/3Cvh8Ny5WG

(H/T to WrestlingInc.com for transcribing the above Charlotte Flair interview quotes.)