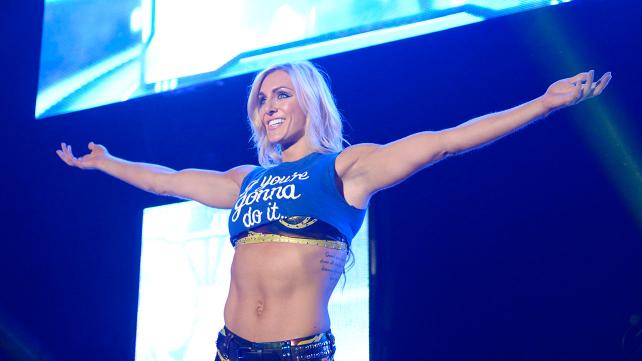 On working with Ric Flair:

For one, he’s my parent in crime, that’s what I labeled him as, but when I heard they were going to pair him with me, I really kind of got nervous. I looked at my dad as one of the greatest talkers of all time, and I was like ‘oh no they’re putting with him, and I need a mouthpiece,’ and obviously I have to share the stage every week with, in my eyes, the greatest of all time. People are probably like ‘she’s just thinking [she’s] walking out there with [her] dad.’

At work, I don’t see dad, I see him as my manager and he’s my co-worker. I don’t want him to steal my spotlight, so it really forced me to get deep and own this heel turn that has really just given me life on the main roster. [It] separated me from the Divas Revolution when I first started as just kind of a babyface, Ric’s daughter.  I really took it as a challenge, and wanted to get better in all aspects and I’ve always felt more comfortable being a heel to begin with.

I’m on the road five days a week. My dad doesn’t really travel on live events unless we’re overseas. So I’m by myself Friday, Saturday, then I meet up with him Sunday night and TV’s Monday-Tuesday. But my dad was gone most of my life as a kid so getting to spend this time with him I think it’ll be harder when he’s not there. He has been [by my side] this whole time so it’ll be more like ‘I’m sad my dad’s not here’ because he’s been really close to me.

Behind the scenes,  Becky Lynch is my best friend, and the three of us travel together a lot and he’s just like one of the boys (laughs). Sometimes, I’m like ‘dad I need you to give me feedback,’ and he’s so positive, and I think he could be so biased. I’m like ‘dad I need you to tell me that today sucked or something,’ that’s the only time I get really annoyed because he’s so positive.

No, I don’t worry about that. The three of us obviously do well under pressure, the only difference is there’s more people. What me, Becky and Sasha do the best is steal the show, that’s what the three of us plan on doing this WrestleMania and I’m saying that as Divas.