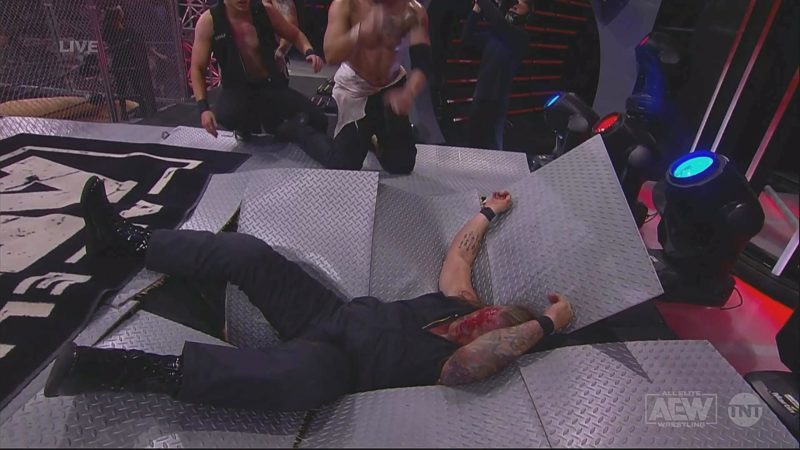 Chris Jericho had Excalibur concerned at the end of the AEW Blood & Guts match on Wednesday night. After The Inner Circle surrendered with MJF’s threat to throw Jericho off the cage, MJF did it anyways. Excalibur proclaimed, “He may have ended the career of Chris Jericho here tonight.” Jon Moxley Fans ‘Demand Refund’ At AEW Dynamite.

Chris Jericho told the Sunday Night’s Main Event podcast that he does have a non-wrestling job at AEW.

“I think I literally have a position, Senior Advisor to the CEO, I’m not kidding. There was a time with EVPs and everything, I was like, ‘I don’t want to have anything to do with it.’ These guys are doing a lot of work at the beginning with finding sponsors, going to Cracker Barrel, helping book towns, doing all this stuff. I didn’t want anything to do with that. On the creative side of things, I worry about Chris Jericho’s storyline first and foremost, I don’t know if I have a lot of say.

Obviously, Tony is the boss and that’s one thing that has really grown and I knew it from the start. A lot of guys thought, ‘Oh, we’re a big committee and team.’ No, there needs to be one boss and that’s Tony Khan. Then you file down from there. If Tony looks at a certain section and asks my advice or opinion, I’ll give my feedback An advisor is a great way to explain what I do for AEW. Not just for Tony Khan, but for a lot of guys.”