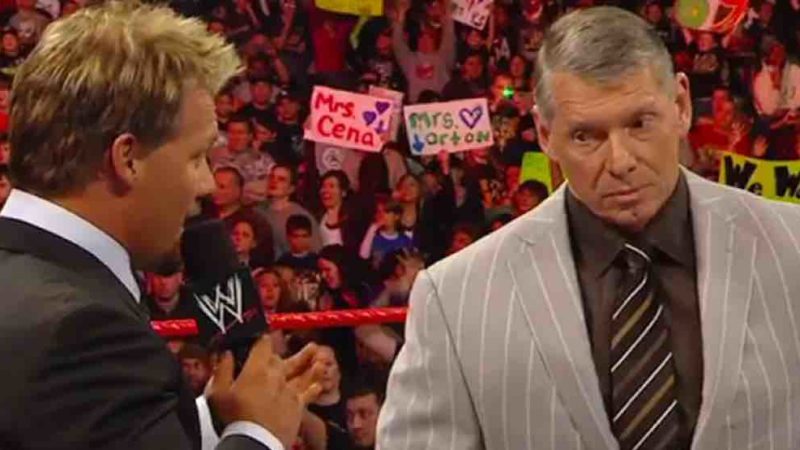 During a recent edition of the ‘Talk Is Jericho’ podcast, former WWE superstar Nick ‘Eugene’ Densmore recollected the time Vince McMahon infamously tore both of his quads during the 2005 edition of the Royal Rumble. The former Eugene told former AEW World Champion Chris Jericho a story after the event went down to become of the most talked about moments in sports entertainment history. Chris Jericho was just ‘disrespected’ on WWE Smackdown.

” I probably didn’t put my face in front of him enough,” Dinsmore admitted. “I would have liked to maybe got a little bit better relationship, but I was there half nervous, showed up on time doing what I’m told. I had my knee injury, and I was in Birmingham doing therapy. And he was just getting out of surgery, so I just walked to his room, and he’s there.

Densmore then added: “And he’s got his legs propped up, and he’s half not shaven. I can tell he’s nervous. I say, ‘I just want to say hi. Make sure you’re okay. And if you need anything, I’m in town, so I can I do it for you.’ I wish I would have sat a chair down and just talk his ear off. He had nowhere to go. I had all these questions in my head. ‘I was eight years old when I saw this. What’s the true story?’”

Jericho then chimed in, discussing how McMahon probably hated the sight of himself having to be taken out on a stretcher as he added the following the conversation. “I’m sure he hated the fact that you saw him in that condition,” Jericho stated. “I remember when he tore his quads, they made us clear the hallways when they took him out on a stretcher. Vince didn’t want to have anybody see him that way.” Jericho booking a storyline an AEW star hated was just revealed.