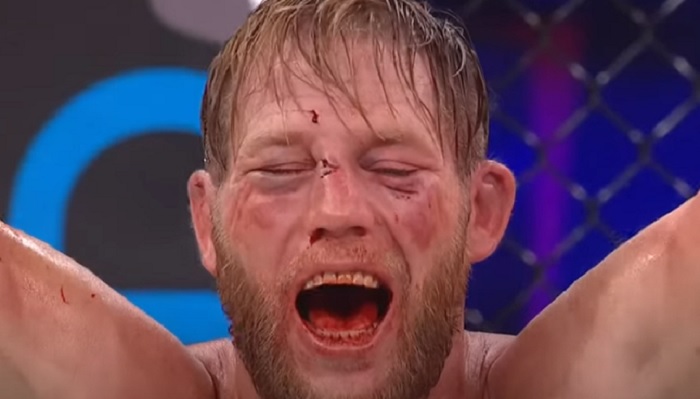 After improving to 3-0-1 NC with a hard-fought, three-round split-decision victory (29-28, 29-28, 28-29) over previously unbeaten Brandon Calton at the Bellator 250 MMA event on Thursday evening, October 29, 2020, several pro wrestling and MMA personalities took to social media to comment on the fight.

Hager kept his mostly unblemished pro MMA record in tact in the featured Heavyweight bout on the preliminary card of the Bellator 250 event on 10/29, which aired live on DAZN, CBS Sports Network and all of Bellator MMA’s digital platforms from the Mohegan Sun Arena in Uncasville, Connecticut on Thursday evening.

Following the bout, which saw Hager’s eyes swollen and his face cut and lumped up, pro wrestling and MMA personalities such as Chris Jericho, Jim Ross, Renee Young, Kevin Sullivan and even Hager’s wife, Catalina Hager, joined the official AEW Twitter feed in chiming in on Twitter to share their post-fight reactions with the pro wrestling and MMA social media communities.

Check out tweets from the aforementioned names reacting to the Jake Hager vs. Brandon Calton fight from Bellator 250: Mousasi vs. Lima on Thursday night, October 29, 2020, via the tweets embedded below.

For those interested, you can also click here to watch the Jake Hager vs. Brandon Calton fight from Bellator 250 .

Congratulations to the Inner Circle's @RealJakeHager on remaining undefeated with a win over #BrandonCalton at @BellatorMMA 250 pic.twitter.com/FYpls7LbUL

Holy smokes @realjakehager just won a WAR at @bellatormma 250
tonight and remains UNDEFEATED IN MMA!! Even though his modeling career might be over, you might wanna think twice if you wanna mess with the #InnerCircle… https://t.co/hE5GiZ0VtP

I think I might be rock hard with emotion right now! My husband is a beast! So proud of him! @RealJakeHager @BellatorMMA pic.twitter.com/WQqXSiJhTO

Wow! What an absolute slugfest!! Congrats on the W @RealJakeHager , now someone grab that man a raw cold steak for that face.