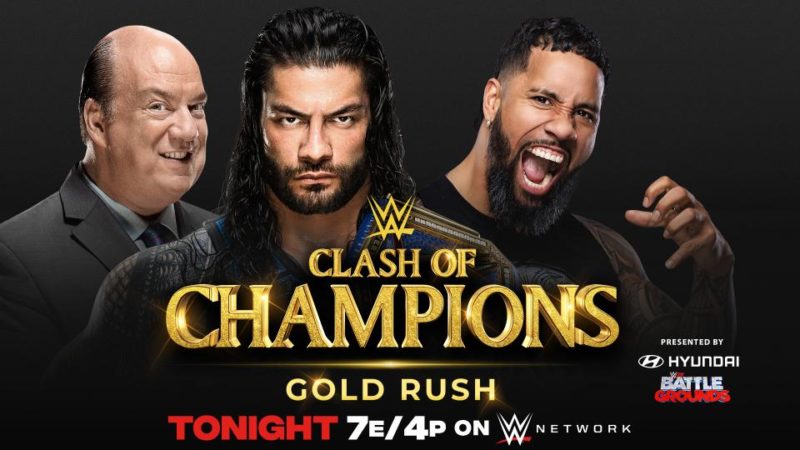 It’s that time of the month where WWE graces us with their PPV extravaganza. Tonight, Clash of Champions sees every title on the line. Last minute changes cause complications for the Women’s Tag Team Championship match as well as the SmackDown Women’s Championship.

It seems that they moved Zelina vs Asuka to the main card as well. Instead, Lucha House Party takes on Nakamura and Cesaro with Metalik is on the outside of the ring for this, letting the recently volatile Lince Dorado and Kalisto to battle. Looks like Lucha House Party is more cohesive than they have been in recent weeks, though the champions have a clear size advantage.

The teamwork between Kalisto and Dorado lead to some incredibly fun moments on the outside as well as quickly alternating offense. Shinsuke tosses Lince into the Thunderdome and leaves an opening for him to give Kalisto a Kinshasa while Cesaro performs a swing.

Show is going to start hot with the ladder match. Match starts with Sami mouthing off to both before Jeff focuses on the attack. It isn’t too long before ladders come into the fray with all men getting a piece of the ladder.

Jeff Hardy seems to get the brunt of the action as both AJ and Sami focus on throwing him into every ladder possible. Outside the ring Hardy is able to get his bearings and deliver a whisper in the wind to AJ. As he recovers, Sami hits him with a Helluva kick and goes to climb the ladder but is met with a lawn-darted ladder from AJ. Jeff and AJ fight on top of the ladder and when Jeff tips it sacrificially. All three men continue to battle for position, with each men learning how gravity works. Sami goes to set up a ladder between the ring and the commentary table, but AJ puts Sami on there and Jeff delivers a Swanton to Zayn from the top of a ladder.

As Jeff and AJ jock for position, Sami is able to fire back up and comes out with two sets of handcuffs, and handcuffs Jeff Hardy’s earlobe to a ladder. When Sami gets back in the ring and fights AJ he handcuffs the two of them together. AJ tries to figure out how to pull Sami up with him, but Sami pulls out a handcuff key and uncuffs himself, cuffing AJ to the Ladder. While Hardy tries to fight them off with the ladder cufffed to his ear and AJ tries to reach the top, Sami Zayn climbs unchallenged for the win.

R-Truth is wandering around backstage where he unintentionally enters the referees room. As Truth tries to leave, Drake follows him out and Drew Gulak sees Truth and pins him quickly to become the new champion.

Every match is a championship match at #WWEClash of Champions … and that include the #247Championship!

This is an opportunity for Zelina to show her abilities as a singles competitor. Asuka dominates early, but Vega is eventually able to take advantage of an opening to try to out-grapple Asuka. Zelina gets a few opportunities to get the win, but the final sequence sees Asuka outlast every counter Zelina throws her way to land an Asuka Lock for the submission win.

After the match, Asuka goes for a handshake but Zelina bows instead. As Asuka returns the bow, Zelina attacks her, causing Asuka to cut a scathing promo in japanese as she leaves.

Ricochet is ringside with Apollo Crews while Lashley has MVP in his corner. Lashley opens the match with some pure grapling, trying to take Apollo’s legs out. Crews delivers some attacks to the outside, but Lashley is quickly able to get back in control, using his superior strength.

Lashley seems to approach this match with casual violence, underestimating his opponent and even getting given the military press and standing moonsault from his smaller opponent. Apollo even nails a standing shooting star and huge splash, though Lashley kicks out. Lashley catches Apollo in The Hurt Lock to get the submission win and retain.

Andrade and Angelo Dawkins start the match. Though Montez Ford quickly gets in, Andrade and Garza are working well in tandem, even having matching gear. The two use quick tags and tandem offense to isolate Ford from Dawkins.

Andrade and Garza continue their aggression, though it looks like Garza may have injured himself and quickly tags out.  Dawkins gives Andrade a powerbomb and and though Andrade clearly kicks out at 2 the ref calls for the bell. There seem to be looks of confusion, and when they cut back Andrade is with medics ringside treating Garza.

As Drew Gulak is giving an interview about his 24/7 Championship win, he is ambushed by R-Truth who gets his baby back with a quick roll-up.

Bayley comes out to address the Nikki Cross situation. Since Nikki Cross is unable to compete she gives a brief open challenge which is unanswered at first. Suddenly Asuka appears and accepts the challenge.

The match is very fast-paced. Asuka and Bayley maintain the attack on each other, though outside Bayley hits Asuka with a steel chair to get disqualified.

As Bayley mockingly leaves she is hit with a chair by Sasha Banks. Banks is still in her neck brace, and though Bayley tries to use the chiar on her again, she does grab the Kendo Stick but Sasha gets ahold of it and attacks Bayley with it instead. She also gets the steel chair and as Bayley tries to leave Sasha just throws the chair at Bayely through the ropes.

There’s intensity from both competitors with Orton taking the early edge. He seems to have McIntyre dead to rights pretty quickly, but out of nowhere Big Show comes out and grabs Orton by the neck, putting him through the commentary table before leaving. Drew recovers and starts throwing Orton around the ring, bringing him up the ramp making his way toward the ambulance.

After throwing him into the ambulance, Drew grabs a pair of crutches out of the Ambulance but grabs a red steel chair with a white cross on it to beat down Orton with. Orton reverses fortunes and starts using every part of the ambulance he can as a weapon, targeting Drew’s Jaw. Drew gets an opening and goes to deliver a claymore to Orton who moves out of the way making Drew kick off the door.

The fight goes toward the back and Christian appears in catering, also attacking Orton.

They make their way toward the ambulance, and Drew is thrown into the windshield by Orton, and they end up fighting on top of the Ambulance as well. As McIntyre tries to hang on, Orton does his best Scar from the Lion King impression to force him off. Suddenly Shawn Michaels shows up and superkicks Orton off the Ambulance.

Drew gets thrown into the Ambulance by Randy Orton, but since Orton closes the doors at the speed of a ladder climb Drew is able to fight his way back out. Drew delivers a Claymore, but as he puts Orton in the Ambulance he takes a moment to deliver a Punt before closing the doors to retain his title. After the doors shut, the Ambulance Driver is revealed to be Ric Flair!

Roman comes out without a shirt to the excitement of Twitter. The match stews in its opening, but there is a ton of emotional investment in it.

Roman feels like he’s playing with his food as he easily manhandles Jey, asserting dominance over his cousin. Even on the outside, Roman seems more like he’s punishing his cousin than competing with a wrestler. Jey manages to catch Roma by surprise and get a 2 count with a Samoan Drop. This only infuriates Roman who only increases his attack.

Jey manages to find an opening courtesy of a ring-post and fires up, flying out of the ring to take advantage of Roman and managing to get a pair of two counts with a crossbody and superkick. Roman has Jey cornered, but Jey catches a Spear into a roll-through and delivers a Superkick for another two count, but takes a low-blow on the kickout. Roman delivers a spear and continues his trash talk to Jey.

Because Jey won’t acknowledge Roman as his tribal chief, Roman continues to hit Jey with spears and man Roman is amazing working the camera. Romans just keeps shouting “Acknowledge Me” and continuously beating down Jey. Jimmy comes out with a towel, telling Jey that he’s gonna throw it in. Jey pleads to Jimmy to not throw it but when Roman drags him back in the middle of the ring and continues beating him Jimmy throws it in and gets in to save him. The ref stops the match as Jimmy gets in to tend to his brother and acknowledge Roman as the Tribal Chief.