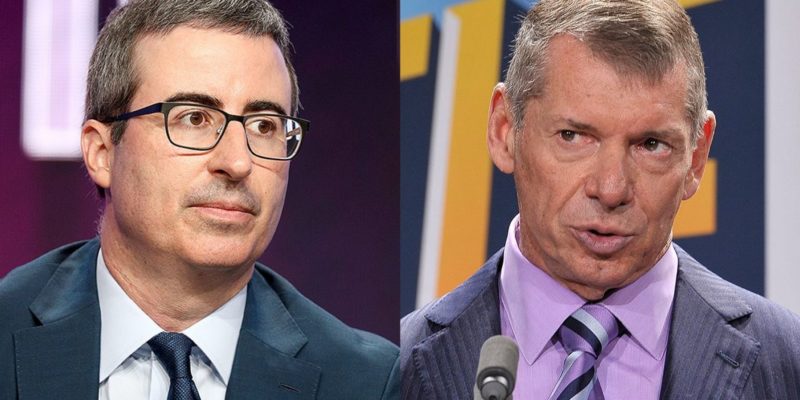 John Oliver’s report on “Last Week Tonight” threw WWE into the spotlight, following a damning report on the poor health of superstars, past and present, as well as citing the lack of health insurance for company talents.

“Wrestlers dying early is a troubling trend,” according to John Oliver. He cited a 2014 FiveThirtyEight study of wrestler death rates and firmly placed the blame on WWE CEO Vince McMahon and the contracts the company has in place with its talent:

“While the character Vince is an a—hole, it’s important to know that the real Vince is also an a—hole,” Oliver said. “Many fans legitimately hate him. While the WWE has made him a billionaire, many wrestlers say he’s treated him terribly.”

“Vince McMahon has always had this mentality about treating wrestlers like circus animals,” Bret “The Hitman” Hart, whose brother Owen died wrestling for WWE, said. “There are all these wrestlers who have broke their backs making this living for years, end up with nothing when it’s over and then they sort of take you out back, put a slug in the back of your head and dump you out … That’s the life of a professional wrestler.”

Oliver also blasted McMahon for not funding the health of retired performers:

“Even the NFL, for all its massive faults, now offers players health reimbursement accounts and has legitmate funding for older players who may be dealing with health issues,” Oliver said. “When you have lost the moral high ground to the f—king NFL you are morally subterranean.”

With WrestleMania season, WWE were likely hoping the story would blow over, but that has not been helped by a number of prominent people coming out in support of the HBO piece. This also includes people with former ties to the company.

Well, after a complete viewing, this is the absolute most truthful outside media piece I’ve seen on wrestling in over 40 years:https://t.co/CKsAnqbGUS

I shit my britches, please RT @LastWeekTonight (I love you!) @iamjohnoliver

Will trolls call him bitter too? Sometimes you gotta hear it from an outside source. One who is precisely accurate https://t.co/Pun9cIVpgW

ESPN contacted me on doing a story about concussions for e60 years ago. I told them that wasn’t the story. The story was on “independent contractors”.
Congrats to @iamjohnoliver & #lastweektonite for their great piece & I hope it gets people taking.

Compare the number of premature deaths to those who died of natural causes. Drug addiction is a lethal mask for PHYSICAL & psychological pain. Their wellness policy is also a sham & a selective “witch hunt” to weed out those who don’t “play the game.” Don’t buy into #Propaganda

and to clarify, I’m not trying to encourage “this company’s bad, this company’s good” mud slinging or nit picking. just encouraging folks to support alternatives since the competition for your interest will create positive outcomes for wrestlers across the board.

Thank you @iamjohnoliver for exposing the fraud that is the Independent Contractor status of #WWE talent. Guess what it doesn’t just apply to the wrestlers, but also their announce team.

Given the reaction, WWE couldn’t ignore the story and have issued the following statement via one of their representatives:

John Oliver is clearly a clever and humorous entertainer, however the subject matter covered in his WWE segment is no laughing matter. Prior to airing, WWE responded to his producers refuting every point in his one-sided presentation. John Oliver simply ignored the facts.

The health and wellness of our performers is the single most important aspect of our business, and we have a comprehensive, longstanding Talent Wellness program.

We invite John Oliver to attend WrestleMania this Sunday to learn more about our company.”

A HBO spokesperson also weighed in:

“The show likes to let the segments speak for themselves and will not be available to comment on this.”

John Oliver is unlikely to attend WrestleMania and clearly this is a story that has not yet run its course. What do you guys think?