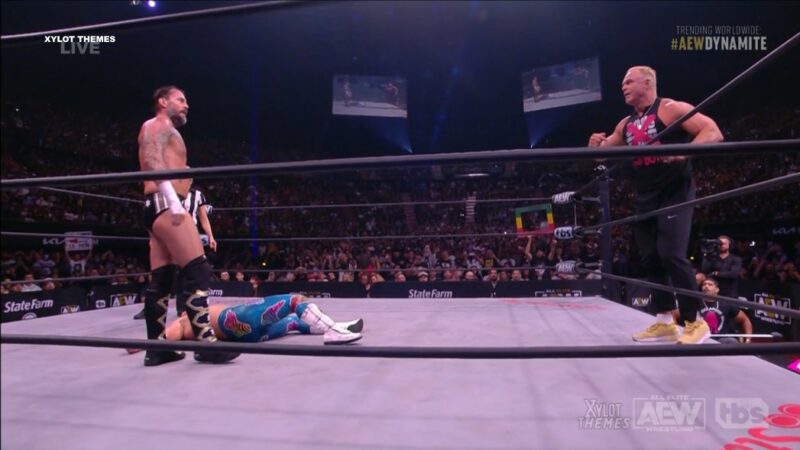 CM Punk messed up powerbombing one of Billy Gunn’s sons onto him on AEW Dynamite last night, as seen below.

Maxwell Jacob Friedman (MJF) recently cut an emotional promo about the what went down during “Double or Nothing” weekend. He blasted AEW President Tony Khan and dropped ‘WWE’ bombshell as well. It was noted that during the commercial break, the newly crowned AEW World Champion CM Punk made his way to the ring and tried to confront MJF. The Salt Of The Earth had no interest in talking to Punk and left through the crowd.

My cousin just sent me this clip of MJF walking out the Forum being chased by security and CM Punk #AEWDynamite pic.twitter.com/jM3XqkCf8c

MJF has been heavily teasing a potential jump to WWE upon his contract expiry in AEW. His contract with AEW is set to expire in 2024 and the three-time Dynamite Diamond Ring winner had previously made it clear that he’s open to jump ship, provided WWE rolls out more money than AEW President Tony Khan could possibly match. The AEW star has been critical of Khan over the past few months and crossed all the limits on the latest edition of Dynamite.

He questioned why Tony is resistant to pay the man who has been busting his a** all this time, when instead, he hordes all that money to give it to all the “ex-WWE guys who can’t lace up his God d**n boots”. MJF asked Tony if he would like him better if he was an ex-WWE guy. He thinks he shouldn’t have the power to run a wrestling company, he should be behind the guard rail like the fan he is. He doesn’t want to wait until 2024 to wrap up his AEW contract, he wants Tony to fire him right now.

He then screamed into the camera that Tony Khan is a “f**king mark” before the mic got cut off and the show went to commercial. Fans have been shedding praise on the star to make his feelings known and drew comparison to how CM Punk cut the infamous ‘Pipebomb’ promo during his time in WWE.