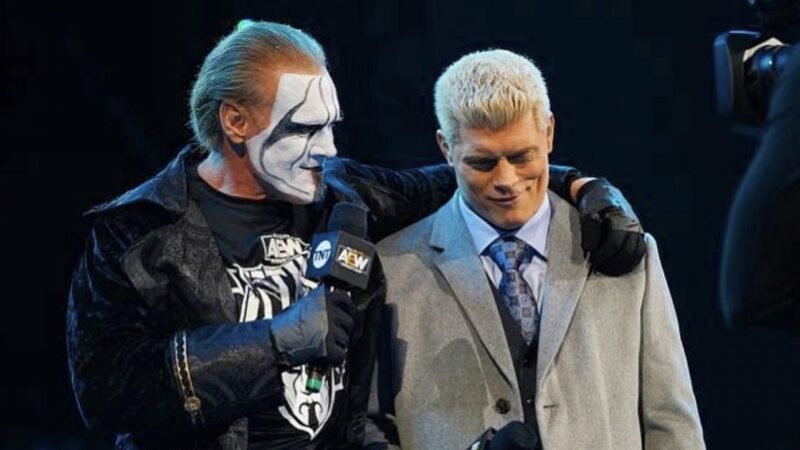 Cody Rhodes sent a text message to Sting before AEW Revolution, as detailed below.


Sting says he never envisioned himself working a match like what he did tonight in #AEW. He thought the cinematic match would be where it started. But Cody Rhodes and Tony Khan said Sting had kinetic energy and he could do real matches. Said Cody texted him today “game day.”

WWE star The Miz is featured on his own show ‘Miz and Mrs.’ The A-Lister recently took to his Instagram and posted a video clip featuring himself which read ‘In Memoriam of Mike’s Balls.’

It was hilarious but some people might find it gross as well. He explained how John(John Morrison) made the video clip “from the roast of….” He further lauded the attention to detail. Rey Mysterio Daughter WWE Return Leaks?

The Miz tags Alexa Bliss and others in the post

“Here’s the full video made by John from the roast of my (cherry emoji). I appreciate the attention to detail. Thx @johnhennigan @marysemizanin @mrmiz1 @heelziggler @ryancabrera @alexa_bliss_wwe_ @queenie1155. BTW I still don’t think anyone understands that a vasectomy does not chop off your (cherry emoji). When the singer comes in that’s the part that gets me (face with tears of joy emoji)”

A post shared by Mike "The Miz" Mizanin (@mikethemiz)

The Miz had been in a feud with Damien Priest for quite some time. The former WWE Intercontinental Champion suffered a loss against Damien Priest in a Zombies Lumberjack Match at the recently concluded WrestleMania Backlash pay-per-view.

During a recent conversation with Sports Illustrated, former AEW World Champion Chris Jericho stated that Cody Rhodes might end up regret leaving All Elite Wrestling. Credit to the outlet for the below

“Is it surprising at first? Sure. But it’s wrestling, man. It happens all the time. The only reason why this was such a big one is that it’s the first AEW guy who left, and Cody had a huge part in this company. But now there’s Bryan Danielson, CM Punk, Adam Cole, and Keith Lee with us. The more of those guys we bring in, the less spotlight is necessary to be shown on Cody Rhodes. Maybe that’s one of the reasons why he left. I don’t know. No one knows except for Tony Khan and Cody Rhodes. But he wasn’t happy in AEW, so he’s going to WWE, or be a stay-at-home dad, or do TV shows or whatever it is he’ll do,”

Jericho would then continue, comparing the industry to Saturday Night Live:

“I honestly think, in a few years, he’ll look back and think, ‘I had it pretty good in AEW. Maybe I should have stuck around.’ But you can’t think that way. Guys come and go all the time. That’s the business. Look at WWE – Hulk Hogan left, Bret Hart left, Steve Austin left, The Rock left, John Cena left, Shawn Michaels left. It’s Saturday Night Live. Adam Sandler left. Eddie Murphy left. Will Ferrell left. What do we do? You build new stars and move forward. Good luck to Cody, and good luck to us. That’s the nature of the beast.”