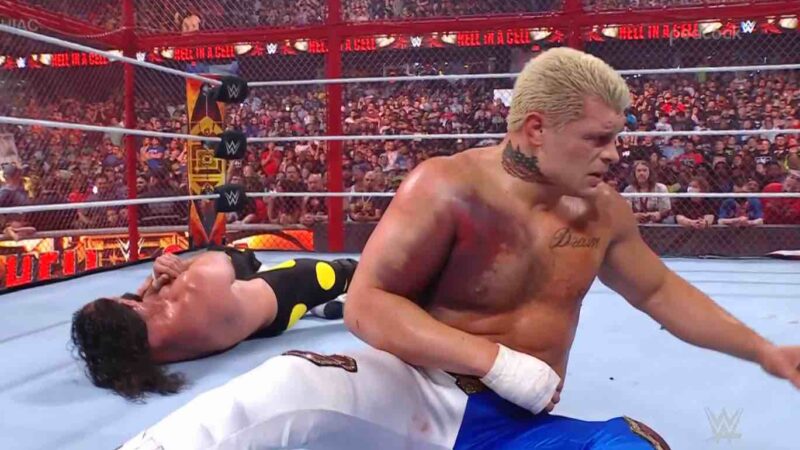 WWE star Cody Rhodes showcased an incredible performance against Seth Rollins inside the Hell In A Cell at the namesake Premium Live event. It was previously speculated that he might be a part of the show as it was announced that he suffered an injury. He also cut an emotional promo following the victory. The injury had raised concern for the fans including his wife, Brandi Rhodes, who showed some concerns during the match as well.

During the match, things got a bit tense. She sent out a tweet that said, “Sweating and smoking knee pads.” The emojis she included hinted at the idea that she was a bit concerned. After Cody Rhodes won, Brandi returned to Twitter and sent a message about what she will tell her daughter, Liberty, if she is ever told that she can’t do something.

Liberty better not ever tell me “I can’t”. I’m gonna have this match cued up faster than she can finish her sentence. Never imagined he would be able to finish that match…and win.

Liberty better not ever tell me "I can't". I'm gonna have this match cued up faster than she can finish her sentence.

Never imagined he would be able to finish that match…and win.

WWE announced shortly before the event that Rhodes tore his right pectoral tendon off the bone while preparing to face Seth Rollins. Despite showing severe bruising, he went on to defeat his long-term rival in a gruesome battle that lasted for 24 minutes.

WrestlingNews.co reported that Rhodes was cleared because he couldn’t suffer more damage to his completely torn pec. They also added that a few spots were scrapped from the match: The report stated that Rhodes had the option not to compete, and WWE would’ve come up with an alternate plan. However, it was ‘The American Nightmare’ who insisted on wrestling anyway:

“Cody had the option to not do the match and WWE officials would have come up with an alternate plan but Cody was said to have insisted on going out there and the match went on as scheduled.”

For the love of the game