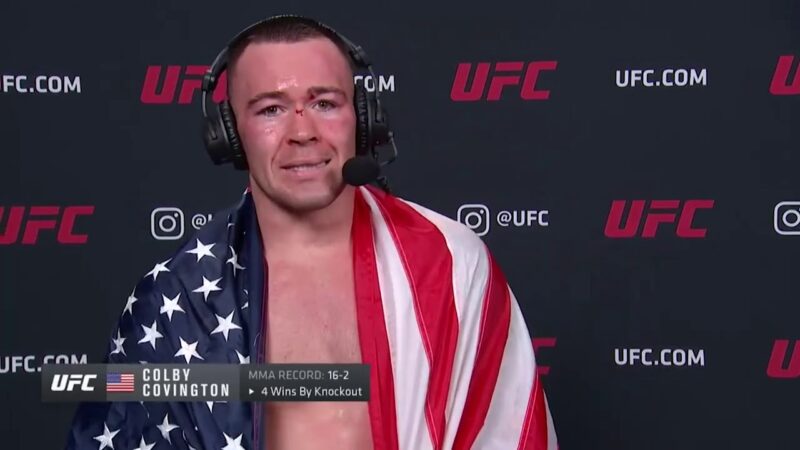 Kamaru Usman suffered a knockout loss against Leon Edwards at UFC 278. Usman was eyeing to make the sixth successful defense of his welterweight title as he dominated the majority of the fight. However, Edwards came up with a stunning high leg kick from nowhere to register a comeback win in the contest. Much like everyone, the No.1-ranked welterweight contender Colby Covington was also surprised.

Colby Covington was involved in two title bouts with Usman over the years and is widely regarded as the second-best UFC welterweight even after coming up short in both fights. ‘Chaos’ has also stated previously that he’s the only fighter in the division who could ever beat the now-former champion. So it’s not surprising that the outcome of Usman’s latest fight came as a huge shock to the former title challenger. Here is how he reacted to the shocking moment.

Before the fight, Covington posted a video surrounded by his girlfriends with a fake steroid needle, calling Usman yet again the ‘CEO of EPO.’ He wrongly predicted Usman would defeat Leon Edwards.

This was Kamaru Usman’s second career loss, first in the UFC, and the only knockout loss of his MMA career. The ‘Nigerian Nightmare’ has been undefeated for the past nine years, and his last loss before UFC 278 came against Jose Caceres in May 2013. We will see what is next for him.

UFC president Dana White expects to book a trilogy fight between Leon Edwards and Kamaru Usman next, it’s just a matter of determining the logistics.

“How do you not do – f*ck, Wembley,” White told MMA Junkie and other reporters post-fight at the UFC 278 post-fight news conference.

“I don’t know. Yeah (I want to do it in England). … We could go to England whenever the hell we want to now. We could go to England – we were selling out England before. Now you look at, do you do a bigger arena? I’m scared to go outside, and I’m definitely scared to go outside in England. I’m serious, but joking about England. Anything is possible in England now. It would be fun, but it’s scary at the same time. The weather isn’t the greatest in England.”