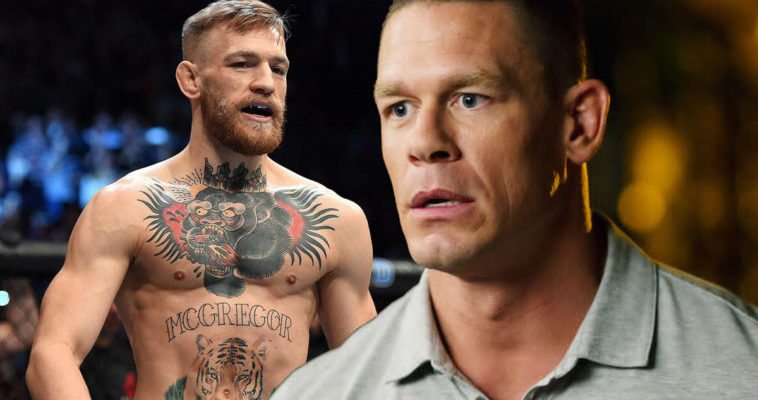 Conor McGregor’s barrage on WWE superstars continues – this time John Cena is the one in the firing line.

During media for his his rematch against Nate Diaz at UFC 202 next Saturday, McGregor had the following comments for WWE’s ‘top guy.’

What’s the main guy? John Cena, He’s 40, he’s 40 years of age. He’s walking around in a luminous orange t-shirt and a headband talking about how nobody can see him, we can see him right there. He’s a big fat, 40-year-old failed Mr. Olympia motherf*cker.

The Irishman also took issue with ‘Nature Boy’ Ric Flair who recently intimated that individuals with an amateur wrestling background, such as Dolph Ziggler, could kick Conor’s ass:

I don’t know what to say to Ric Flair. This ain’t no gimmick, this is the real sh*t. I’ve got to get in and fight a man for real. With no script, with no nothing. He was talking about bringing some other wrestler guys out to challenge me, come bring it then. This is the real sh*t over here, if you want to come over we can fight no problem. A few of them are talking about the street and all. If they want to do that, come at me and see what happens.

McGregor closed by putting over Vince McMahon and old school wrestlers, but slating the current ‘new generation’ of dweebs.

Like I said, no disrespect to the dons of the game, the McMahons.

Vinny Mac is a f*cking legend. They wrote Vinny off a few years ago when he dropped from the billions and then he rose back up and now he’s back in the billionaire club. What he’s been able to do with that bunch of dweebs he has over there at the moment has been phenomenal and I respect him for that. And then of course the OGs of the game, The Rock, Stone Cold, they’re all cool motherf—ers. Even Ric Flair is a cool motherf—er.

Any thoughts, guys? We are sure there will be some…