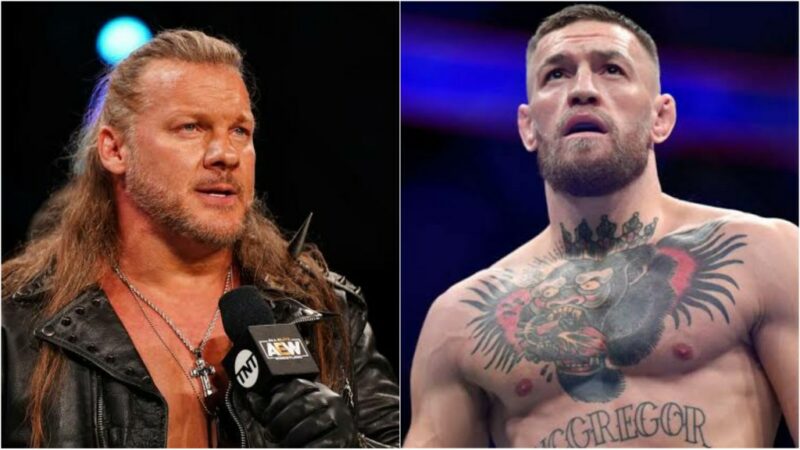 MJF ripped off Conor McGregor when cutting a promo on Chris Jericho on AEW Dynamite.

The Labours Of Jericho – Chapter 4
Chris Jericho vs. Wardlow (w/ MJF at ringside)

The commentators run down the lineup for next week’s Dynamite and then take us to break, noting the main event — Chapter 4 of The Labours of Chris Jericho — is up next. On that note, we head to another commercial break.

We return from the break and we hear the familiar sounds of Chris Jericho’s theme. “Le Champion” makes his way down to the ring as the fans sing along with the lyrics to his catchy entrance music. He settles into the ring and awaits his opponent.

Wardlow’s music hits and he makes his way out and about half way down the entrance ramp, his music cuts off and the theme for MJF hits as The Pinnacle leader makes his way out to take his spot at ringside per the stipulation for this match.

The bell sounds and we are off-and-running with our main event of the evening. We see “The Demo God” fare fairly well early on, even catching the powerhouse of The Pinnacle with a Codebreaker for a near fall. From there, however, Wardlow began to put a prolonged one-sided beatdown on the leader of The Inner Circle.

He goes for a power bomb and connects. He goes for another and Jericho tries to escape but Wardlow muscles him up and power bombs him back down. We head to a mid-match, picture-in-picture commercial break on that note as the action continues in this one. We return from the break and the commentators inform us that Wardlow has hit Jericho with back-to-back-to-back power bombs to the point that we’re up to somewhere around eight or ten in total in a row.

Finally Jericho tries firing up for a comeback. He goes after Wardlow with some punches but is cut off by the big man. He hoists “Le Champion” up and connects with his F10 finisher, but doesn’t go for the finish. He sets Jericho on the top-rope and calls for the big one but Jericho recovers and counters into the Walls of Jericho as the crowd springs to their feet and come alive.

As Jericho pulls for all he’s worth, out of nowhere, MJF runs over and rakes the eyes of Jericho when the ref was out of position. This allows Wardlow out of the hold. He slides in behind the two and goes to pass the Dynamite Diamond Ring to Wardlow but instead the ref catches him and ejects him from ringside. As she’s making him leave, Wardlow goes over to Jericho, who has snuck Floyd the baseball bat into his clutches. He blasts Wardlow with it without the ref seeing and follows up with his Judas Effect finisher for the win.

After The Match: Stipulations For Labours Of Jericho Chapter 5

The win gives Jericho his fourth Labours of Jericho win in a row and now his fifth and final chapter will be the rematch he has long-desired against MJF.

Jericho isn’t given a celebration, however, as Shawn Spears hits the ring and attacks Jericho from behind. Wardlow joins in and then MJF heads to the ring. They beat Jericho down until Jake Hager runs out and runs them off.

At the top of the entrance ramp, MJF reveals the stipulation for their rematch in the Labours of Jericho Chapter 5 showdown. He says there will be no Judas theme song for his entrance and there will not be allowed use of his Judas Affect finisher. If he does use it, MJF automatically wins. MJF calls himself Mystic Max in a blatant Conor McGregor (Mystic Mac) rip-off. He vows Jericho will find out that he has not only met his match but his successor. His theme hits to end this week’s show. Thanks for joining us!