Conor McGregor is known for being one of the most ‘infamous’ names in the UFC today – so much so that his nickname is ‘the Infamous One’. Coming off a shocking and bone-crushing defeat to Dustin Poirier at UFC 264 fans have been wondering what could be next for Conor McGregor. Conor McGregor’s Facetime call with this woman recently leaked.

At least for now, that answer is a very straight forward one. A haircut. On social media via IG story, McGregor recently revealed a new short and shaved hairdo which you can view below.

In other news regarding Conor McGregor, UFC media member Chael Sonnen came to the defense of McGregor after many combat sports fans and fellow media members have stated that McGregor is purely making ‘excuses’ for the fact that he his now 0-2 in his last couple of fights. Sonnen stated the following. Credit to SportsKeeda for the below.

Sonnen continued: “I don’t mind the excuse tour. It’s very common. I’m not sure why we’re giving Conor a hard time, for all of a sudden joining the tour. The tour’s much bigger than him and has been around much longer, and will be here long after him. It’s just unusual, it’s not the way Conor’s done things before.” 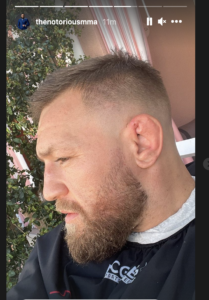