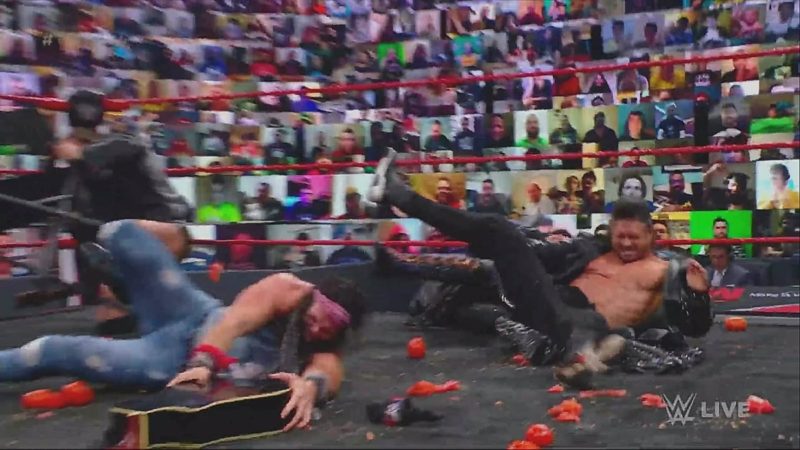 What a night Raw has been already. We may already have an injury on our hands and we are barely into the show. If this injury proves to be serious, we may not be seeing this superstar for some time. Mace & T-Bar ‘Rip Off’ Fired WWE Tag Team.

Miz welcomes us to MizTV and introduces Elias as his guest.

Miz takes credit for the success of ticket sales for Bad Bunny’s recently-announced world tour and they want to offer something to prove how talented they are, so here it is, their very own concert.

Elias talks it up and dedicates his performance to Shane McMahon. They proceed to play a terrible out-of-tune acoustic version of Miz and Morrison’s diss song at Bad Bunny.

They are, of course, interrupted mid-verse by Damian Priest.

He apologizes for interrupting their performance and says he just felt like he had to see it person, like he did at WrestleMania. Their performance moved him, so they have a surprise of their own, the New Day! They open Xavier Woods’ guitar case and reveal that it’s full of tomatoes, which they throw at the heels to give them their estimation of their performance.

What happened during this is that John Morrison was hit directly in the “nether-regions” likely by Priest. That had to hurt! Morrison played it off well but as the camera panned to Damian (who threw the tomato) he smirked and broke character a bit. The reception to this part of the show was cold as fans took to Twitter comment sections to describe how bland it was.

Did John Morrison take a tomato in the balls? #WWERAW #WWE pic.twitter.com/ufVuiKnL8a

John Morrison caught a tomato right to the dick. 😂😂😂